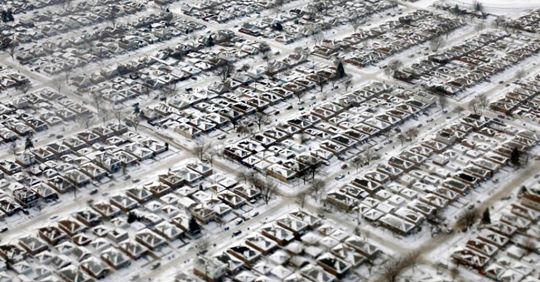 A DECADE AFTER RECESSION, ILLINOIS’ CONSTRUCTION INDUSTRY IS ICE COLD.

Why is Illinois construction so weak? As it turns out, big government programs can’t paper over weak fundamentals.

Ten years ago, the nation bottomed out.

The second quarter of 2009 was the lowest point of the Great Recession, the ashes from which the U.S. economy would rise. New data from the Bureau of Economic Analysis released in November show how far each state has come in the decade since.

And how far Illinois still has left to go.

Bottom line: Illinois’ recovery has significantly lagged the regional and national growth stories. Over the past decade, Illinois’ economy has expanded by 14.7% in real terms. The rest of the Great Lakes region, which includes Michigan, Ohio, Indiana and Wisconsin, has grown 21.9%. The rest of the U.S. saw 25.7% growth.

These abstract figures represent very real lack of opportunity for Illinois families, businesses and even governments. They show the grass is growing greener elsewhere.

Gov. J.B. Pritzker’s office has touted raising the minimum wage and signing a capital bill as evidence of their work to improve the state economy.

But Illinois history runs counter to the governor’s narrative.

In 2009, then-Gov. Pat Quinn signed a $31 billion capital bill to stimulate construction spending. Despite that massive influx of cash, Illinois’ construction industry continued to decline for more than three years. Construction output in Illinois today is 2.1% below what it was in 2009.

This calls into question the potential boost from Pritzker’s capital bill, which is already shrouded in controversy. Two of its key backers in the General Assembly, Chicago Democratic state Sen. Martin Sandoval and state Rep. Luis Arroyo, have announced their resignations in the wake of a federal corruption probe.

Why is Illinois construction so weak? As it turns out, big government programs can’t paper over weak fundamentals.

In 2018, Illinois saw 10,000 permits issued for new single-family homes, according to the U.S. Census Bureau. The state averaged around 40,000 permits a year prior to the Great Recession. That 75% plunge is the worst decline of any state in the nation. Indiana, Michigan, Wisconsin and Missouri have all seen more single-family home construction than Illinois for three years running.

Monthly permit numbers released so far suggest 2019 will be similarly slow for Illinois.

Ultimately, the construction sector is downstream from the state economy overall. Getting Illinois on a path to healthy growth requires a competitive business climate, reasonable tax burden and effective government services.

But standing in the way of all three is the worst state and local pension problem in U.S. history. It is the cause of endless property tax hikes, hollowed-out government services and pressure for higher taxes at the state level. Pritzker’s progressive income tax proposal, for example, would raise Illinois’ corporate income tax to among the highest in the nation.

The path toward better growth is not paved with flashy new government programs. It is paved with the discipline and honesty to get the basics right.