Spanish Version: Best Thing About Me Is You!!!!!

English Version: Best Thing About Me Is You!!!!! 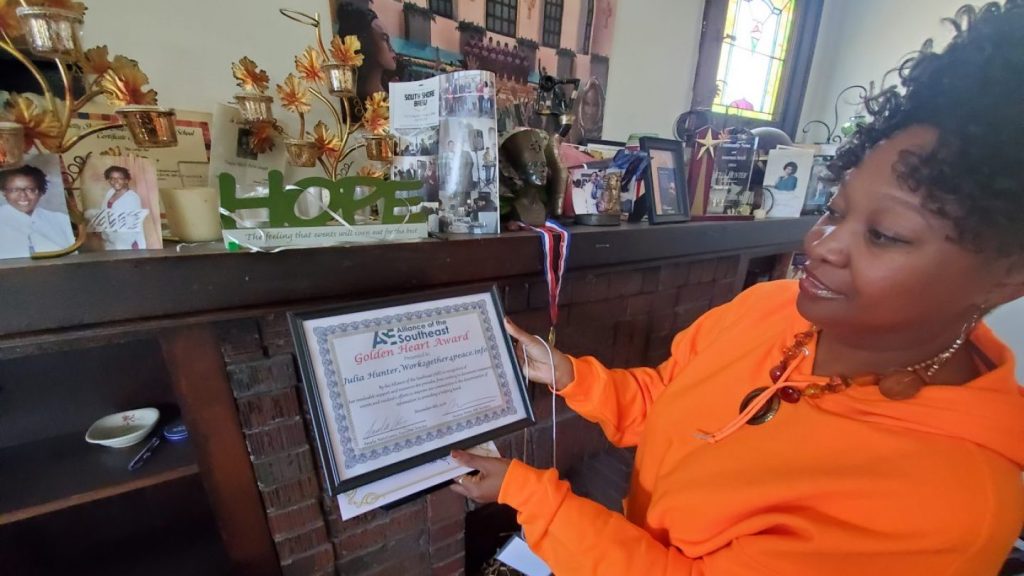 Work2gether4Peace, Julia Hunter’s One-Woman Newsroom, Has Been Informing The Southeast Side For Nearly A Decade By Maxwell Evans@afrodip, Blockclub Chicago

Julia Hunter has been covering community meetings and events on the Southeast Side for years — for no pay. “Even if you do just reach three people … you thank God for those people. That’s what serving really is at the end of the day.”https://blockclubchicago.org/2019/10/14/work2gether4peace-julia-hunters-one-woman-newsroom-has-been-informing-the-southeast-side-for-nearly-a-decade/

East Side is one of the 77 official community areas of Chicago, Illinois. It is located on the far south side of the city, between the Calumet River and the Illinois-Indiana state line, approximately 13 miles (21 km) south of Downtown Chicago. The neighborhood has its own park on Lake Michigan, Calumet Park, and its own forest preserve, Eggers Grove Forest Preserve, which neighborhood residents usually call Eggers Woods. It is served by U.S. Highway 12, U.S. Highway 20, and U.S. Highway 41, which are multiplexed in this neighborhood.

The East Side, until recently, was socially and economically dominated by the Calumet River and the jobs it supported. The community got its name from the river because it was located on its east bank. The river formed the once-thriving industrial Port of Chicago. A cluster of riverside docks and slips allowed materials of all sorts to be loaded and unloaded onto adjacent railroad lines, and the river itself was lined with steel mills. Republic Steel began operations here in 1901. The Republic mill was the site of frequent union unrest, culminating in the Memorial Day Massacre of 1937 and the successful drive by the United Steelworkers to organize the Chicago mills.

South Shore is one of 77 well-defined community areas of the City of Chicago, Illinois in the United States. A predominately black neighborhood located along Chicago’s southern lakefront, it is a relatively stable and gentrifying neighborhood. Notable residents of this neighborhood include rapper Kanye West and First Lady Michelle Obama.

began as a lakefront retreat for the wealthiest of Chicago’s movers and shakers. Marshall and Fox, architects of the Drake, Blackstone, and Edgewater Beach Hotels, were hired to design an opulent, Mediterranean-style clubhouse for a membership that included Chicago’s most prominent families. The grounds provided private stables and members-only beach, and golf course. Tennis, horseback riding, and skeet shooting were enjoyed by guests the likes of Jean Harlow, Will Rogers, and Amelia Earhart. Between the first and second World Wars, a housing boom brought a development of luxury cooperative apartments and mansions to the neighborhood surrounding the club. In 1974 the club held its last members-only event. Today, the Chicago Park District owns the property.

It has been restored to its original design and is now open to the public. A major drawback to the South Shore and neighboring South Chicago neighborhoods is that they are one of the few remaining Chicago lakefront neighborhoods that lacks a fully publicly accessible neighborhood shoreline. There are lakefront gaps between the existing South Shore Cultural Center and Rainbow beach to its south. Even larger masses of lakefront land along the South Chicago neighborhood (at the abandoned USX Steel Mill) with their beautiful vistas of the city Lakefront and Chicago skyline are currently restricted to the public and not available for recreational enjoyment by the adjacent neighborhood residents. Presently, Chicago Lakeside Development proposed plans call for the completion of this southern portion of lakefront with the development of new parklands, beaches, and a continuous waterfront bicycle and jogging path that will link Calumet Park and Beach in the East Side neighborhood to the South Shore Cultural Center in South Shore. Completion of such a project would result in improved access to Chicago’s southern Lakefront and connect it neighborhoods such as Hyde Park and Bronzeville to the north.

Located as far as 3300 east of the CTA Red Line in some areas, South Chicago is not connected to the Chicago L rapid transit system. The neighborhood does, however, contain 4 newly-rebuilt Metra Electric Line, South Chicago Branch stations: Cheltenham E. 79th St., East 83rd Street, 87th Street, and 93rd Street/South Chicago, which terminates in the heart of the neighborhood’s business district along South Baltimore Avenue, and is the community’s most accessible commuter rail service to downtown Chicago. Although Metra is mainly a suburban service, the outbound South Chicago Branch, which terminates within Chicago’s city limits is the only Metra line to do so.

South Chicago is also served by a number of Chicago Transit Authority bus routes, services which enable commuters to make relatively easy connections to downtown and other Chicago neighborhoods. The buses that serve South Chicago are: