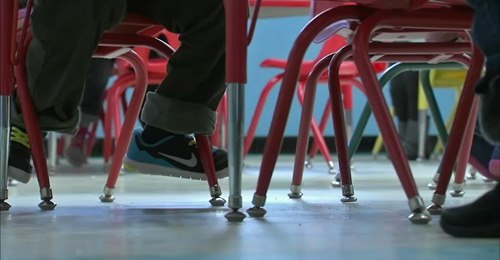 CHICAGO (WLS) — CTU leadership is meeting Monday evening to schedule an up-or-down vote on what the union says at this point is not yet an agreement, but simply a framework for teachers, students and staff to return to the classroom as early as Thursday.

The vote could begin as early as Monday night. Twenty-five thousand Chicago Public School teachers are being asked whether the deal struck between their union and the mayor is good enough for them to return to in-person learning.

“Our members have to read it,” CTU President Jesse Sharkey said. “Discuss and ultimately make a decision as to what is going to happen next.”

If approved, students, teachers and staff will have a staggered return to their physical classrooms.

No date has been set for high school students to return as of yet.

“Our young people and our students have been deeply impacted by COVID-19.not just in their educational activity, but also in terms of their social, emotional learning,” Mayor Lori Lightfoot said.

Only 1 in 5 eligible students chose to return to the classroom when initially offered the opportunity. Among them was 6-year-old Layla Scott, a first-grade cluster student at Thorpe Elementary. Layla’s mother Ebonie Davis is now preparing to send both her and her twin sister Leah – who was initially set to remain virtual – back.

“I’m hopeful that there isn’t a sudden stop again,” Davis said. “Now we’re going back online. Now there was a breach in the agreement. You know, anything can happen. I’m just hopeful.”

Once the voting begins, teachers will have anywhere from 24 to 48 hours to make their choice. If approved, those returning first will have priority access to available vaccines that are being set aside for teachers.