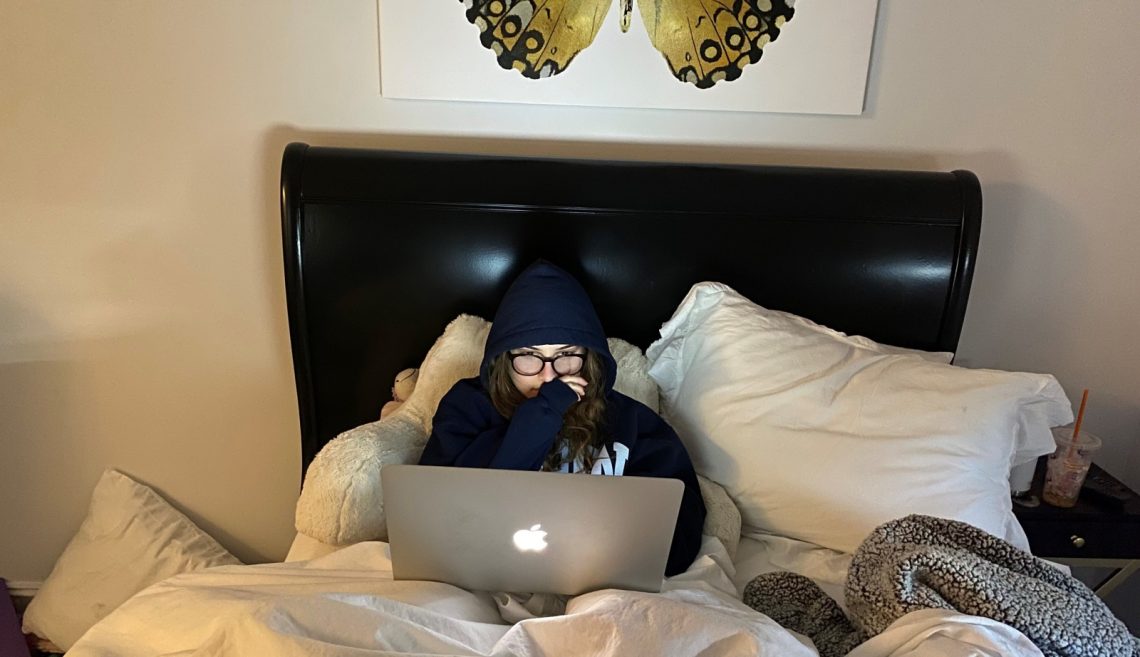 Depression, anxiety, weight gain and even loss of toilet training are on the rise in kids as the pandemic drags on.

At the beginning of the school year, Paige Gagerman was highly motivated. The Deerfield High School junior got dressed each day and set herself up for a day of school at her desk, or the kitchen. But now in second semester, Paige sits in bed with her sweatshirt hood over her head. Remote learning has worn her down.

“I think that all the hope and all the life has been drained out of me and my peers, and really the teachers, too,” Paige said. “I think that is very apparent in my grades, in my commitment to my classes.”

Before the pandemic, Paige said she earned good grades. She played two sports and was in a number of clubs at school. Now, she does a few activities online, but she mostly stays in bed, not bothering to turn on the lights for class, not bothering to change her clothes for days.

“It’s really defeating,” she said. “Sometimes, I’ll stay up for hours during the night, anxious about the homework I couldn’t [be motivated] to do. Or about the fact that I just don’t know what to do with all these thoughts. It keeps me up at night.”

She thinks sometimes teachers misinterpret the hopelessness for laziness, which adds to her anxiety. Paige is looking forward to meeting with a therapist soon, a first for her. She thinks going back to school, even for a few hours a day or a couple days a week, would be a major boost to her mental health. Some relief might be coming her way. On Monday night, the school board in Deerfield approved beginning a transition to hybrid learning on Feb. 23.

Paige’s experience has become more common for teens during the pandemic. After the pandemic hit the U.S., mental health-related doctors visits for kids between 12 and 17 years old increased about 31% compared to 2019, according to the Centers for Disease Control and Prevention. The CDC also found an increase in children visiting the emergency room for mental health crises.

Worrisome trends in the pediatrician’s office

Pediatricians are also seeing troubling signs in their offices.

Kimball said the common thread is continuous remote learning. She said while kids are resilient, this is pushing the limits.

Kimball said the damage of staying remote outweighs the risk of going back to school. She’s part of a group of parents and medical professionals calling for Evanston Township High School to open for at least some form of in-person learning.

Concerns about teen mental health has become a major arguing point in the push to reopen schools. In January, a student at Glenbrook North High School died in an apparent suicide. The student’s family told reporters they believe the isolation of pandemic played a part. While some mental health professionals have said it’s hard to tie the increase of psychiatric visits exclusively to remote learning, some say in-person class could help.

“Whether it’s because you as a family have been impacted by COVID … or the loss of income or simply the loss of your routine. It’s having this deep impact on kids across the board.”

Erika’s Lighthouse has no stance on whether schools should reopen. And Kubert said while there are kids in both remote and in-person learning who are in pain, there are also kids who are doing well right now. But she is concerned what school workers are missing. They are often the first to identify when a student is struggling, but generally it’s been harder to do remotely.

“That’s why we’re seeing that jump in the emergency room, referrals for mental health, because kids are not getting this early identification,” Kubert said.

Erika’s Lighthouse offers free mental health programs for schools, and Kubert said there’s been a significant increase in schools, both in-person and remote, signing up.

While the push continues to reopen schools, Kubert cautions that in-person learning, or even the end of the pandemic won’t solve all the mental health problems.

“Schools that are smart are going to be preparing for the repercussions that are going to be happening next year and the year after as kids are playing catch up, as life is not immediately going back to the way it was before,” she said.

Correction: Since the pandemic hit the U.S., mental health-related doctors visits for kids between 12 and 17 years old increased about 31% compared to 2019, not 2020.