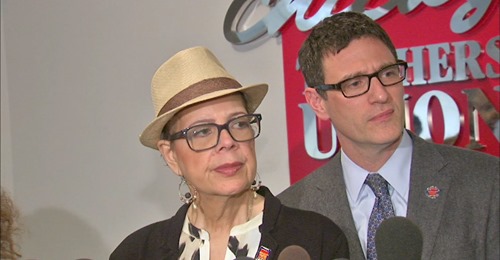 Lewis, 67, served as president of the union until stepping down in 2018, with Jesse Sharkey serving as her replacement.

She was a force to reckoned with. Karen Lewis turned the Chicago Teachers Union into a movement in the city of Chicago.

“Karen taught us how to fight, and she taught us how to love,” the CTU said in a statement Monday. As CTU president, the former high school chemistry teacher gave a powerful voice to rank-and-file teachers.

Moving on is exactly what Lewis did after she led the city though a teachers strike in 2012. While negotiations were contentious with former Mayor Rahm Emanuel, both put their differences aside and built a relationship out of mutual respect and admiration. Emanuel and Lewis remained friends after both left their offices.

“We used to share Jewish prayers together or things we had read about Jewish history that we both liked,” Emanuel said. “But also, we would have a dark sense of humor about each other but also about things that were going on and we shared that, too. But Karen, you never left a room and said, ‘Who was that?'”

Lewis was a product of Chicago Public Schools. Her parents were CPS teachers. After graduating from Kenwood Academy, she went on to become the only black female in her graduating class at Dartmouth College in 1974.

Lewis eventually returned to Chicago to become a high school teacher for over 20 years before leading the union. While she had a tough exterior, former spokesperson and close friend Stephanie Gadlin said the public never saw Lewis’ vulnerable side.

“While she took the issues very seriously, she didn’t take herself that seriously,” Gadlin said. “She was warm, funny, candid, she could speak three languages, loved opera. She used to be a stand-up comedian.”

And Gadlin said Lewis was a true champion for education justice.

“I think the legacy of Karen Lewis will live on and will resonate in our city for a long time to come, and rightfully so,” Mayor Lori Lightfoot said.

Lewis was diagnosed with an aggressive type of brain cancer in 2014 at a time when she was considering a run for mayor. She returned to work after treatment, but had a stroke in 2017.

“The nation has lost a true champion. Karen Lewis was one of the most powerful and prolific voices in public education, advocating for students, their families and the communities in which they live. For her tenure as president of the Chicago Teachers Union, she was the architect of today’s fight for education justice. As her spokeswoman, I cannot tell you how inspired I was by her leadership as well as her vulnerability as she navigated the treacherous terrain of Chicago politics. I cannot count how many times we shared tears over the plight of students and people who have been marginalized for years, or the bellows of laughter due to her biting sense of humor. Karen was my homegirl. She rocked. Our city has lost a great voice. I send my heartfelt condolences to her loved ones, friends and to the 25,000 members of the CTU. May her memory reign for all days to come and she find rest in the bosom of God.”

“Our union is in deep mourning today at the passing of our sister, our leader and our friend, President Emerita Karen GJ Lewis. We are sending heartfelt condolences to her husband, John Lewis, and her surviving family and friends. She will be dearly missed.

“Karen taught us how to fight, and she taught us how to love. She was a direct descendant of the legendary Jackie Vaughn, the first Black, female president of our local. Both were fierce advocates for educators and children, but where Jackie was stately elegance, Karen was a brawler with sharp wit and an Ivy League education. She spoke three languages, loved her opera and her show tunes, and dazzled you with her smile, yet could stare down the most powerful enemies of public education and defend our institution with a force rarely seen in organized labor.

“She bowed to no one, and gave strength to tens of thousands of Chicago Teachers Union educators who followed her lead, and who live by her principles to this day.
“Karen had three questions that guided her leadership: ‘Does it unite us, does it build our power and does it make us stronger?’ Before her, there was no sea of red – a sea that now stretches across our nation. She was the voice of the teacher, the paraprofessional, the clinician, the counselor, the librarian and every rank-and-file educator who worked tirelessly to provide care and nurture for students; the single parent who fought tremendous odds to raise a family; and the laborer whose rights commanded honor and respect. She was a rose that grew out of South Side Chicago concrete – filled with love for her Kenwood Broncos alumni – to not only reach great heights, but to elevate everyone she led to those same heights.

“But Karen did not just lead our movement. Karen was our movement. In 2013, she said that in order to change public education in Chicago, we had to change Chicago, and change the political landscape of our city. Chicago has changed because of her. We have more fighters for justice and equity because of Karen, and because she was a champion – the people’s champion.

“Our hearts are heavy today, but it brings us joy to know that Karen has joined Jackie Vaughn, Marion Stamps, Addie Wyatt and Willie Barrow as the vanguard of Black women who have forged a heroic path of labor, justice and civil rights in our city. Karen now sits among them, still guiding our every move, and still guiding our vision for the schools our students and their families deserve.”

Illinois Federation of Teachers President Dan Montgomery issued a statement saying, “Karen Lewis was a warrior, an undeniably powerful presence, and she spoke truth to power like no one else. She was one of the most committed unionists I have ever known, and she did absolutely nothing half way for the cause of labor. To stand beside her and see her members’ love for her at rallies on the streets of her beloved hometown of Chicago was a sight I’ll always cherish.

“Karen dedicated her life to the fight for equality, fairness, and respect for all people. She led the revival of the Chicago Teachers Union (CTU) and sparked the reinvigoration of teacher unionism across the nation. Under Karen’s leadership during the historic strike of 2012, CTU won a fair and equitable contract for members, and reframed the education debate in Chicago around the schools all children deserve.

“Karen was hilariously funny and could be daringly acerbic. More than anyone I’ve ever known, she contained multitudes and could smartly discuss anything from opera to critical theory to medicine to where to eat in Montreal. In her heart she was a teacher, a nationally board-certified chemistry teacher, no less. It was a privilege to work with her in her role as IFT executive vice president, a position she held for nearly a decade before retiring in 2019. It was an honor to call her a distinguished colleague. Most importantly, it was a joy to call her a friend.

“On behalf of the members of the IFT, I send our love to Karen’s husband, John, and their family. May her memory be a blessing and may she rest in peace.”

Senate President Don Harmon issued a statement saying, “I cherished Karen’s friendship and mentorship and will always be better for it. She was an amazing person, devoted teacher, champion of the professional educator and skilled leader. She was one of a kind, dedicated to her core to challenging and changing lives and communities. We are indebted to her service and leadership, for which she will be remembered and forever missed.”