The long and controversial federal review process for the Obama Presidential Center (OPC) has concluded, and construction may begin as soon as August.

Because Jackson Park, which will be the site of the OPC, is on the National Register of Historic Places, and because federal funds are being used on a significant reworking of roadways within the park, the National Park Service and the Federal Highway Administration had to clear the plans.

In December, a memorandum of agreement was signed to ameliorate the adverse effects the OPC’s construction was found to have on Jackson Park, the Midway Plaisance and the city’s park boulevard system. And today, federal actions around building the OPC and changes to the roads were found not to have a significant impact on the environment.

The city expects to begin work in April.

“From the beginning, Michelle and I knew there was only one place for the Obama Presidential Center: the South Side of Chicago,” former President Barack Obama said in a video statement.

“The past 12 months have been among the most challenging in our history. I know they’ve hit Chicago hard, particularly for residents on the South and West sides who have shouldered devastating health consequences from COVID-19, faced higher unemployment rates and more. But hopefully, 2021 offers a turning point for our nation and our city. And we also hope that the groundbreaking of the Obama Presidential Center can be an important part of that change.”

The project has been incredibly controversial, sparking fears of gentrification in Woodlawn that led to the establishment of a Woodlawn Housing Preservation Ordinance, pushed by Alds. Leslie Hairston (5th) and Jeanette Taylor (20th) to protect residents from displacement and create affordable housing opportunities within the neighborhood, funded with more than $10 million to rehabilitate existing housing and with mandates for affordable units on developments on city-owned land.

“I’m excited. This was never about us not getting the Obama Presidential Center. This was about folks who are currently living in our community being able to enjoy it,” Taylor said in an interview. “I’m looking forward to rolling up my sleeves to work with the city, the foundation and our community to make sure that the library does what it’s supposed to do — honors our first Black president without displacing Black constituents.”

The OPC itself will not be a traditional presidential library: Obama’s papers will be housed in a National Archives facility outside of Chicago, though a branch of the Chicago Public Library is planned for the site, alongside numerous other amenities like a new track and field to replace one it is displacing at Hyde Park Academy High School, 6220 S. Stony Island Ave., across the street from the campus site.

Reached for comment, President Louise McCurry of the Jackson Park Advisory Council praised those amenities for South Side children, saying they “will now have the opportunity to grow up in a community that will allow them improved access to the parks.”

The nonprofit Protect Our Parks (POP) sued the city and Park District in federal court, arguing that the OPC’s establishment on parkland is illegal, though the City Council had authorized it under a long-term use agreement. The group lost in district court and on appeal and has vowed to take the matter to the Supreme Court. 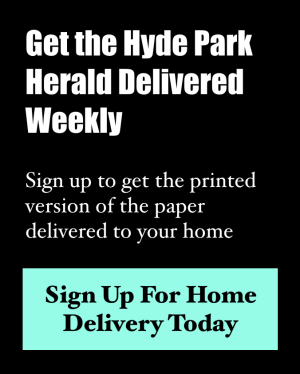 POP president Herb Caplan said in an email that the Supreme Court petition meant that “no work can be initiated until the pending lawsuit is finally decided,” and that other lawsuits would be filed in the coming months.

But once established, the OPC stands to become a significant investment in the South Side. It will cost an estimated $500 million, all paid for by the Obama Foundation. The Lakeside Alliance, a joint venture of local Black-owned firms, has partnered with multibillion-dollar Chicago company Turner Construction to build it; the foundation estimates that it will create 5,000 jobs during and after construction and have a $3.1 billion impact to the South Side.

“The center will create jobs and economic opportunity, especially for South Side residents — because we believe the team that’s building the Center should look like the community it calls home,” Obama said.

Taylor, for her part, stressed the importance of getting local residents into unions and jobs associated with the OPC. But she said she feels like the process is moving in the right direction.

Wallace Goode, head of the Hyde Park Chamber of Commerce, and his wife have been visiting other presidential libraries in anticipation of the OPC. He said friends on the East Coast have talked about coming to Chicago specifically to see it once it’s built.

“I think nationally, it will have a draw unlike any of the others,” he said. The other libraries “are not just a place to store books and archives, but they’re an interactive center where the history is stored, massaged, studied and built upon. And I think that’s what’s really going to happen in this center. It will not only be an incredible tourist attraction — I think it will be an incredible facility in this area that is sorely needed.”

The nonprofit group Jackson Park Watch was critical of the NPS finding. “A project of this scale of the OPC absolutely requires a full Environmental Impact Statement,” the group wrote in a statement. “More worrisome is the fact that the city has yet to produce a full accounting of its financial commitments to the Obama Foundation, a major drain on the city budget in a time of fiscal crisis, and the Obama Foundation has yet to certify that it has indeed raised the full funds needed for the construction of the OPC and for the endowment to operate and maintain it.”

Mayor Lori Lightfoot praised the development in a statement: “With this final step in the review, Chicago is now officially the home of the presidential center for our country’s first Black president. The Obama Presidential Center and nearby capital improvement projects will undoubtedly distinguish our city’s historic South Side as a world-class economic and cultural hub. Through opportunities both created and attracted by these initiatives, residents in the surrounding communities, will have long overdue access to much-needed, sustainable and good-paying jobs and other neighborhood resources.”

In an interview, Ald. Hairston, who has known Obama for decades, said she is glad the community is able to move forward.

“This is much needed — and particularly as we are still in the pandemic, as we begin to move out of the pandemic, to have a project that is ready to go is very important to building the community, investing in the community and building community wealth,” she said. “It’s good to see on the horizon that things are coming along.”