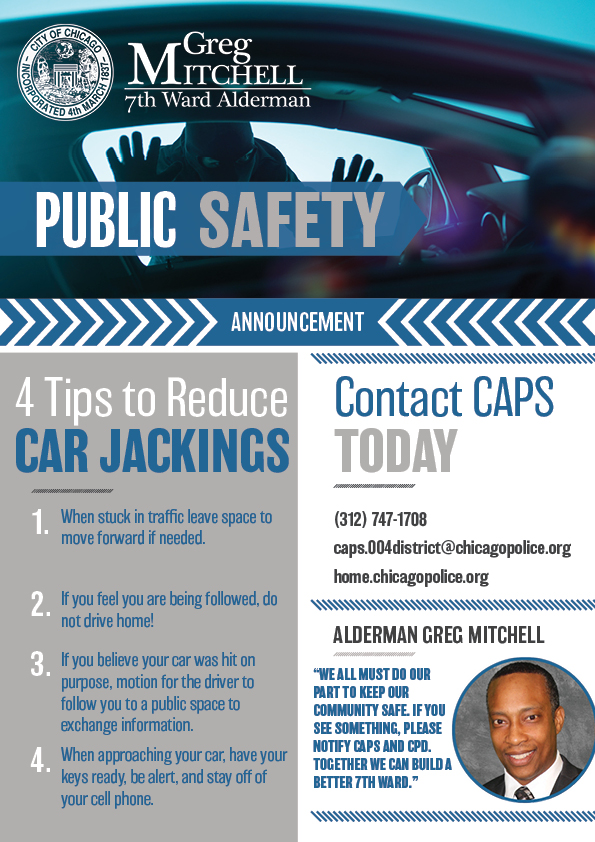 On Friday, my colleagues and I addressed the Public Safety Committee on the rising number of carjackings in the city. The Chicago Sun-Times covered our community’s outrage about this ongoing crisis. ABC7 Chicago also covered the story.

As of Friday, there have been 166 carjackings in Chicago so far this year.

Key facts from our hearing:

1) While adults are most often arrested for carjackings, an almost equal amount of youths aged 15-20, and even younger, have been arrested. This spike in juvenile crime began shortly after the Illinois State legislature repealed the mandatory adult treatment of carjacking cases in 2015.

2) While the State’s Attorney’s Office works closely with the police on carjackings, there are few prosecutions for the “precursor” crime of Criminal Trespass to Vehicle (CTTV), which is a misdemeanor. This is the crime during which many juveniles first get involved as a passenger.

3) While aggravated carjacking is a Class X felony for adults, punishment for juveniles is far less. Many of the adults involved in carjackings have long criminal records, while a fair amount of the juveniles do not. I support legislation to punish adults more severely if they involve juveniles in their crime, and in many cases, I think juveniles should be charged as adults.

4) Almost all the cars taken have been recovered, many times very quickly. The Chief of Detectives said that the primary reason for carjackings is simply joyriding–a very disturbing trend.

While many of us are working on legislative solutions, police are working with their state and federal partners to use new and old tools to combat this epidemic. Most notably, officers in each district are working with detectives to focus on these crimes. These teams communicate with teams in other districts, as well as utilize technology to track the offenders and the cars. The teams also work with the State’s Attorney’s office to make “good” cases that can be proven in court.

But even these arrests will not make an impact unless offenders face real consequences.