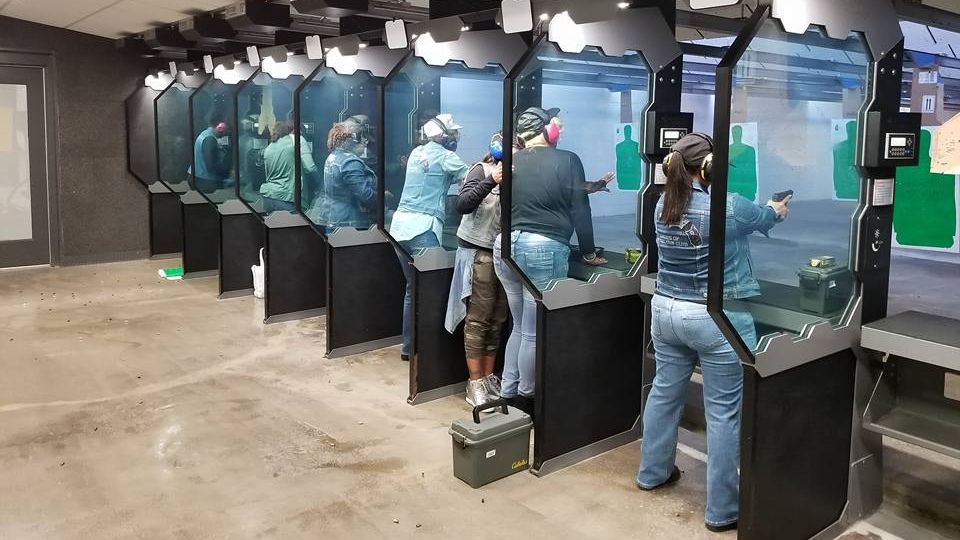 Carjackings were up 135 percent in 2020, and they’re up even more so far this year. As city officials try to make sense of the problem, concealed carry instructors say victims are coming in for classes.

HYDE PARK — Carjackings have been on the rise in Chicago for more than a year. After a 135 percent jump in 2020, the trend is continuing with 61 carjackings reported in the first 10 days of 2021.

As city officials and police scramble to address the issue with meetings, City Council hearings and community alerts, some Chicagoans are taking matters into their own hands against the advice of law enforcement: They’re applying for concealed carry permits.

About 8 a.m., the budding journalist drove her 2014 Jeep Cherokee to the school, 5631 S. Kimbark Ave., to interview students for the Hyde Park Herald.

“I got out of my car and locked my car and was in the middle of the street when I saw a running car in the middle of the street,” Milan said. “Immediately, I thought something bad was going to happen. Then, two guys got out of the car. One guy made eye contact with me and started running towards me. I just started saying ’No, no, no, no, no’ and I winced because he was running towards me and I thought he was going to take me down.

“Then I started saying, ‘Please don’t hurt me, please don’t hurt me.’ He said, ‘Where are your keys?’ and forcibly went through all my pockets. He grabbed my keys and my phone. The other guy was just leaning by the car, watching it.

“I was begging for my life. It was really, really terrifying. You never think you’re going to be a victim of a carjacking, let alone one outside an elementary school at 8 a.m., but here we are and it’s happening.”

Since Jan. 10, there have been at least two community alerts issued for police districts in vastly different parts of the city. From Jan. 14 to Jan. 19 in the 2nd Police District at 51st and Wentworth in Bronzeville, there were five carjackings. In the 14th Police District, at 2150 N. California Ave. in Logan Square, there were also five, taking place between Jan. 9 and Jan. 17.

The carjacking of Milan was typical of the brazen ways some culprits have staged their crimes — without regard for their surroundings, on a block with many homes and right in front of an elementary school.

Milan estimated the ages of her carjackers as 16-20 and said one of the attackers drove off with her car while the other one got back in the car that they rode up in, driven by a third boy or man. The carjacker also took her phone and wallet.

Retired probation officer Javondlynn Dunagan owns JMD Defense, a self-defense company in Beverly that offers gun safety and conceal carry classes. She said her business has boomed as South Side residents increasingly feel ignored by the police and reporters.

Dunagan said carjackings — combined with the riot at the Capitol and unrest this summer — have resulted in large numbers of residents signing up for concealed carry classes. Along with getting a Firearm Owner’s Identification Car from the Illinois State Police to own a gun, gun owners who wish to get concealed carry privileges must complete a 16-hour class.

“It’s a feeling that [the police] can’t handle it and on the South Side, they are feeling neglected,” Dunagan said.

‘We Need Both A Long-Term And Short-Term Solution’

The feeling of fear isn’t exclusive to the South Side.

“I’ve had customers who were victims of carjackings then suddenly conceal carry became their No. 1 priority because they never want to experience that again, and if they do, they want to have a chance,” said the owner of Illinois Protect and Conceal at 6938 W. Higgins Road, who said he his known as IPAC Instructor Paul.

The day after Milan was carjacked in Hyde Park, Chicagoan Erin Groble was the victim of a carjacking in a Wicker Park parking lot at 1:30 p.m. Groble, who was visiting a friend, was getting in her boyfriend’s car near Division Street and Ashland Avenue when another car pulled up with three boys or men inside. Two got out the car and rushed toward her, she said.

Sam Royko, Groble’s boyfriend, said the thieves stole Groble’s purse, phone and some packages that were in the car — along with his 2016 Audi GTS.

“They got out and grabbed her door and started yelling at her and pulled her out of the car,” Royko said.

Groble’s friend got the license plate of the car that pulled up, but police discovered that car had also been stolen.

Police found Groble’s purse later that day in yet another stolen car and found Royko’s car, which had body damage to it, on Monday.

Both carjackings, a day apart, seemed to show how emboldened the thieves have become and how they are happening on sleepy streets and busy thoroughfares, from early morning to late at night, from Hegewisch to Rogers Park and Streeterville to Portage Park.

Along with the time and locations, the methods seem to vary. Most carjackers seem to work in teams of two or three. Some pull up in another car and lightly hit the victim’s car to get them to exit before stealing their vehicle. Some run up when a victim is parked or near their car and force them to turn over their keys. Some target ride-hail drivers. Some have a gun. Most take the victim’s cellphones and other items along with their car. And many of the offenders are young teenagers and are charged as juveniles if caught.

“They know when they commit these crimes they are going to go to jail for a moment and then get right back out … . It’s a revolving door,” Dunagan said.

“There are a lot of things going on. I know the pandemic is part of it, you can’t say that it isn’t,” Ervin said. “But there are also some challenges with the juveniles being released so quickly. There are a myriad of issues that went into creating what we have, and there is no one cure or specific answer. It’s going to take a larger approach to help solve this.”

Royko and Groble said they talked to neighbors, many of whom are afraid to drive at this point. He plans to attend the City Council hearing Friday.

“We need both a long term and short-term solution,” he said. “This is an opportunity for the aldermen and the mayor to come together to try and think of what we can do to fix this.”

Ald. Brian Hopkins represents the 2nd Ward where Groble was carjacked. On Tuesday, he issued a vehicular hijacking alert in his newsletter to constituents, pledging to add additional cameras and plate readers in his ward that can aid in tracking stolen cars and tracking criminal suspects.

“Like many of you, I am shocked by this recent surge in vehicular hijackings,” Hopkins wrote. “Residents have reached out to my office in concern over these incidents, which have been widespread and occurring in many of the bordering wards and police districts. I have personally talked with some of the victims, and I genuinely understand how traumatizing these crimes can be.”

The Friday hearing is just the latest city effort to address the issue. In December, 1,400 residents of two South Side wards signed a petition calling on Alds. Greg Mitchell (7th) and Michelle Harris (8th) city leaders to do something about carjackings.

Despite a meeting on the topic over Zoom, residents expressed frustration and exasperation on social media.

The ‘Good Guy’ Does Not Always Win In A Gunfight

To address the issue, the Police Department relaunched its Vehicular Hijacking Task Force in February. It had been on hiatus since 2018, said police spokesperson Maggie Huynh.

Additionally, in July, the U.S. Department of Justice launched Operation Legend, a coordinated effort in which federal agencies work in conjunction with state and local law enforcement to fight violent crime.

It was that effort that led to federal carjacking and firearm charges against Elias Quinones-Figueroa after he allegedly stole an SUV at gunpoint and hit a cyclist as he sped away in West Town in May. The carjacking charge is punishable by up to 25 years in federal prison, while the gun charge carries a mandatory minimum sentence of seven years, which must run consecutively to the carjacking sentence.

Armed citizens are not the answer to the crisis, Ervin said.

“I’ve been robbed before and if I had a gun on me at the time, it would have done me no good and may have gotten me killed,” Ervin said.

Research shows carrying a gun may actually increase a victim’s risk of injury and people successfully defend themselves with guns in less than 1 percent of crimes.

Some gun proponents point to the story of the owner of a BMW who shot and killed a would-be carjacker on Ida B. Wells Drive.

However, those types of stories are rare, and they do not mention the possible psychological hurdles the BMW owner faced afterwards.

More common are stories of people who lost gunfights, such as retired firefighter Dwain Williams, who was killed in a carjacking Dec. 3. Williams had a gun, but it did not save him. He was shot and killed during an exchange of gunfire with four carjackers who stole his car as he was leaving a Morgan Park popcorn shop.

In Jefferson Park, Instructor Paul said he tries to remind his students it’s always better to give up the car and get away if you can.

“It’s a last-ditch effort,” Paul said. “Imagine how mortifying it would be to shoot and kill another person. It would be something that no normal person wants to experience. And let’s face it, there are very serious legal and financial ramifications that follow thereafter, including retaliation in some cases.

“So, a strong emphasis is put on, ‘Get away if you’re able.’

Milan said the fact she wasn’t armed and stayed calm likely saved her last week, adding the only thing she’d consider carrying in the future might be pepper spray, and even that wouldn’t have helped her last week.

“If I did have pepper spray, I wouldn’t have sprayed it because when you’re in that situation you give up everything you own and you make sure you’re safe. It happened in a matter of seconds and I don’t think people realize how fast it happened,” Milan said.

Dunagan agreed and said the “good guy” does not always win in a gunfight.

“We teach and talk about temperament a lot. We try to redirect people from thinking that they should come in here to get a gun and stop a carjacking,” Dunagan said. “Just like the firefighter. He shot maybe one of them, but they wanted his car and he pulled his firearm and unfortunately lost his life. You’re not always going to win those gunfights.”