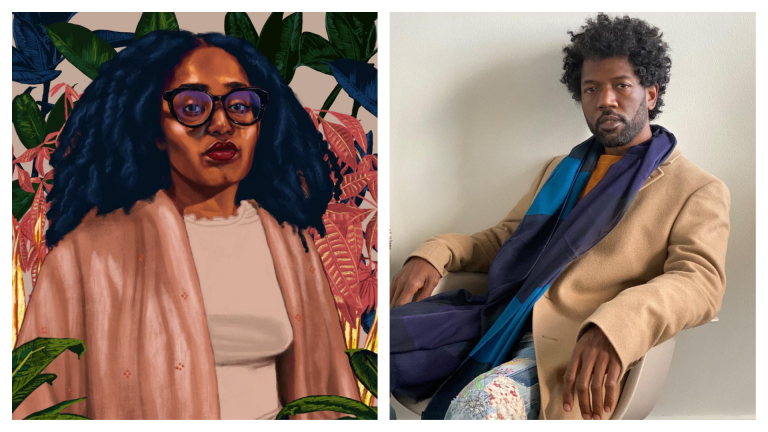 Black artists, activists and educators are recognized this month in the South Side artist’s nod to living history at the Stony Island Arts Bank and on Instagram.

The native South Sider kicked off his Everyday Black Heroes series this month at the Stony Island Arts Bank, 6760 S. Stony Island Ave., collaborating with the Rebuild Foundation to create digital portraits of Black artists, activists and educators around the country, from DeRay McKesson to Trayvon Free.

“I was thinking of things to do in this new year, of ways to show appreciation for the people who have shown support for my work,” he said. “COVID made us really aware … a lot of people lost things, never knowing that the next day or the next time is promised with the people in their lives.”

A conversation with Theaster Gates led to Rebuild sponsoring the month-long collaboration and Breaux puling 12- to 18-hour shifts in his Hyde Park studio to create the portraits, a one-man show from concept to execution.

Each day, Breaux unveils a new portrait of a hero on his Instagram page while unveiling a physical counterpart outside of the Stony Island Arts Bank.

While the project is incredibly labor-intensive, Breaux is grateful for the chance to introduce the people he has long admired to the rest of the world. Doing so, he said, reminds people — particularly, Black folks — of the connective tissue that bonds.

Breaux knew he wanted to be an artist even before he fully understood what it meant. He went from making macaroni jewelry boxes for his mother — “She still has it at her house” — and drawing King Tut’s sarcophagus in fifth-grade social studies to sketching mixtape covers for Chance The Rapper.

The Chicago High School of Agricultural Science and DePaul University alum said he draws his inspiration from the words of James Baldwin, the brushstrokes of Jean-Michel Basquiat and the lyrics of MF Doom. For him, art is accessible and uplifting, personal and public.

“The first artists I knew for being famous, like da Vinci, I only knew because I watched Teenage Mutant Ninja Turtles,” Breaux said. “It blew my mind, too, because it was so cool. I felt a sense of pride in identity, like I was something, naturally, that people are already.”

Breaux hopes that people come away from “Everyday Black Heroes with a renewed sense of purpose, and the idea that when looking for heroes, one needn’t look further than the closest mirror.

“We have to love on ourselves, and show appreciation for ourselves, and really document things,” he said. “Our voices are important to the story, as well.”

Do stories like this matter to you? Subscribe to Block Club Chicago. Every dime we make funds reporting from Chicago’s neighborhoods.