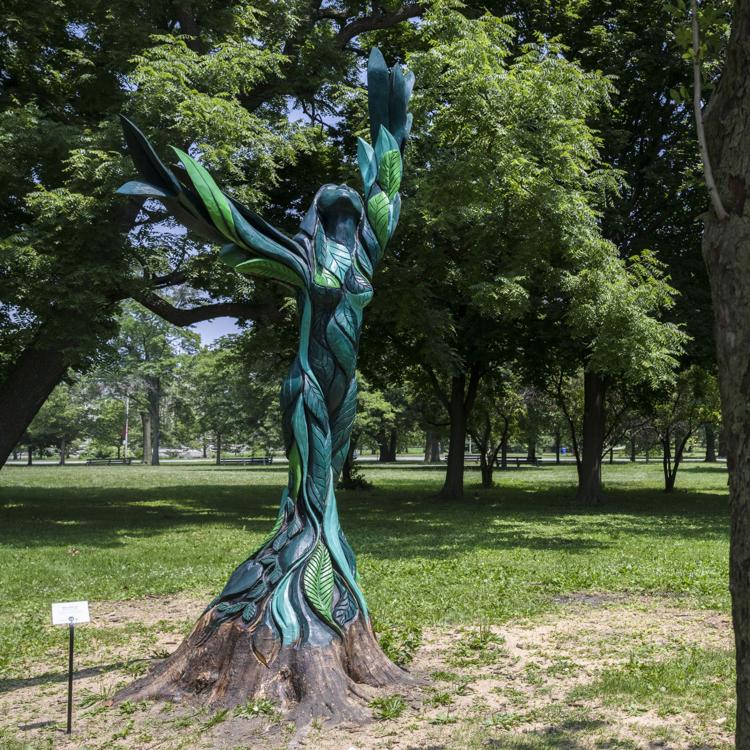 As the emerald ash borer — the beetle called “the most destructive forest pest ever seen in North America” by the Chicago Parks District (CPD) — continues to chew through the city’s trees, artists are continuing their own efforts to salvage something out of the remains. Last month, Jackson Park became the latest location to get a new piece of public art, when chainsaw artist Gary Keenan unveiled “Transformation,” a fifteen-and-a-half-foot-tall statue carved out of an infested ash tree.

The figure, which stands near the corner of 59th Street and Stony Island Drive, is the latest piece in the Chicago Tree Project, a collaboration between CPD and Chicago Sculpture International to create art from the dying trees. There are already a number of sculptures from the group in and around Hyde Park, like the two animals — a wolf and a great blue heron — near the tennis courts in Nichols Park.

Keenan said the statue, which he dubbed “Green Lady” while working on it, gave him an opportunity to carve more elaborate ornamentation than in most of his commissioned work. “Most of the time people are saying we want a couple of cutesy climbing bears, or we want hummingbirds, so I was kind of excited to do something of my own design,” he said. “It was pretty cool to carve a woman comprised of leaves and grass — it had more of a spiritual feel to it.”

Keenan, who lives in Iowa, started carving about 20 years ago. “A friend of mine had seen chainsaw carving at the Iowa State Fair. When this friend of mine was telling me about chainsaw carving, I was thinking i could do that,” he said. “I began by carving a fish. I was crude and I was slow at it but we ended up with a fish.” He went full-time a few years later, leaving his job as a locksmith.

The sculpture has been some time in the making. Keenan first received the grant from the Tree Project in February of 2019, but delayed the carving to allow other sculptors from farther away to travel to Chicago first. When he came to the city in November, he had time to top the tree, cutting off all the branches he didn’t need — a spell of bad weather, however, put off the rest of the project. The pandemic pushed him into June, when he finished the piece over the course of a week: carving, coloring it a half-dozen shades of green, and applying sealant.

While working on the sculpture, he said, plenty of passers-by stopped to comment. “She struck some people as being powerful, and almost everybody said, ‘We loved the fact she’s carved from a tree, she’s rooted in the earth,’ “ he said. “One gentleman came up and said, ‘Thank you for showing us your inner soul, you’ve shown us who you are.’ Nobody’s ever said anything like that to me. I’ve done thousands of pieces. Nobody’s ever said anything quite like that to me before.”