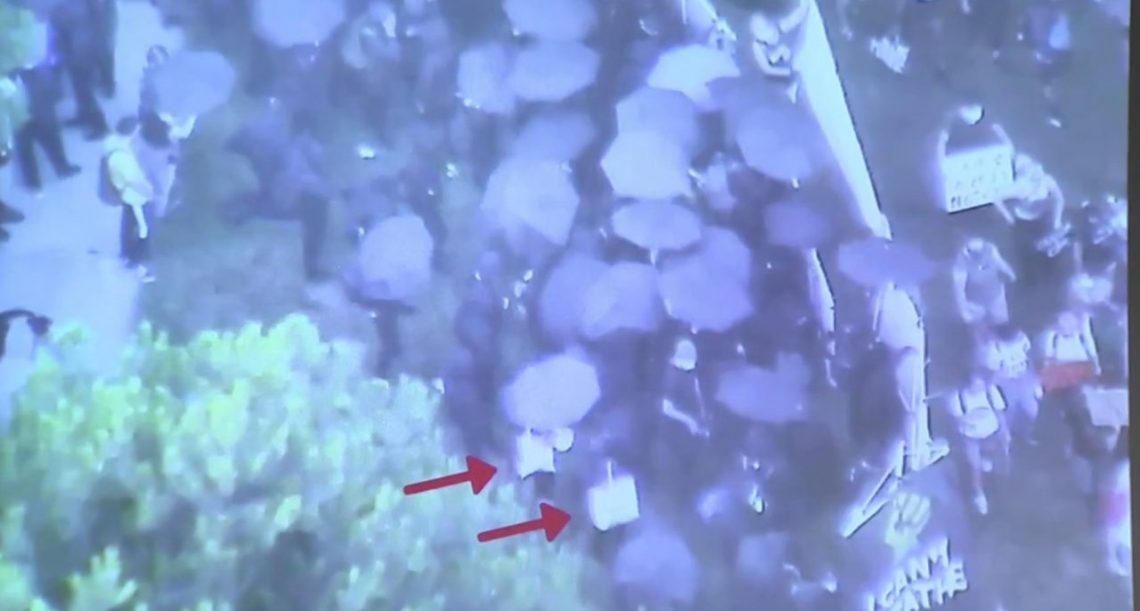 CHICAGO (CBS) — New video of the protest last week in Grant Park was released Monday — taken on the front line this past Friday as Chicago officers were pelted with pipes, frozen bottles and explosives.

Monday morning, Chicago Police Department Area Three Deputy Chief Daniel O’Shea showed off the video footage. In it, the group shows up appearing to be part of the peaceful message.

But they then change clothes, motives and eventually the tone of the crowd: The anatomy of how a peaceful protest can get hijacked.

“Defund CPD” banners in the front of Friday’s peaceful march in Grant Park were held together by PVC pipes that police said later became sharpened and weaponized. What’s still unclear is whose behind the violence at a peace protest.

Members of that so-called organized mob seen changing costume mid-march. In the six-minute montage of police camera footage Friday, they are seen changing into all-black clothing behind a wall of umbrellas carried by allies dressed alike.

One man specifically is seen changing clothes behind the umbrellas and providing extra projectiles for anyone to take and throw at police.

The umbrella shielding is not unique to Chicago.

“We see this umbrella shielding across the world – Hong Kong and China – where the umbrella shields not only the cameras, but from officers on the ground being able to see that you’re changing clothes; that you’re weaponizing,” Brown said.

Next, the group makes its way to to the front of the march. They not only sharpen a PVC pipe, they’re seen re-stocking the crowd with projectiles: bricks and frozen water bottles; fuel to a hot, tense Friday evening.

Police said the group moved in “platoon-like fashion” with their barrier of banners.

Moving forward, Brown said any police, even at peaceful march, will wear riot gear because this is becoming so common.

An explosive is thrown at officers. One sergeant was left with a broken eye socket.

“There’s the sticks being thrown. At one point, you’ll see one of the officers move over – an incendiary device, an explosive device blows up near his eye,” O’Shea said as he narrated the video. “You can see him walking away holding his eye.”

A total of 49 CPD officers were injured, 18 sent to the hospital and 12 protesters arrested.

“That’s not peaceful protest. That’s anarchy, and we are going to put that down. We are actively investigating, and we will bring those people to justice,” Mayor Lori Lightfoot said.

“We must be willing to tell the full story for what transpired against our officers Friday. More than sharing one point of view,” Brown said.

O’Shea said there had been multiple peaceful protests at the statue in past few weeks, but he called what happened on Friday “an ambush on police officers.”

Brown was asked whether he believes the umbrella-carrying agitators may in some way be connected to the organizers of the peaceful protests.

His response was, “God, I hope not, but it sure looks like it.”

CBS 2 reached out to Black Lives Matter Chicago for the reaction to that quote. The organization had not responded as of Monday evening.

Meanwhile, there was another protest and news conference at the Grant Park Columbus statue on Monday evening. The demonstration was peaceful, and officers at the scene did not appear to be in riot gear – though it was not clear whether other officers in riot gear might have been present.

The Civilian Office of Police Accountability or COPA said it is reviewing social media video of incidents as well as those captured on police body cam video and reviewing “tactical response reports” from Chicago Police.