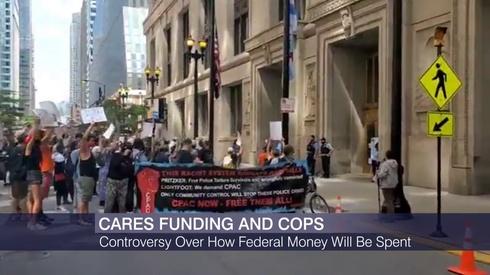 Aldermen signed off on Mayor Lori Lightfoot’s plan to spend $1.13 billion in federal funds designed to help the city cover the cost of responding to the coronavirus pandemic.

However, nine aldermen voted against the spending plan because Lightfoot declined to block the funds from being used to reimburse the Chicago Police Department for responding to the pandemic.

That demand grew out of the protests touched off by the death of George Floyd in Minneapolis police custody that prompted calls for funding earmarked for police departments to be reduced.

The plan approved by aldermen includes $20 million to offer grants to Chicagoans struggling to pay their rent and mortgages because of the coronavirus pandemic.

Another $40 million will be held in reserve to respond to a potential second surge of coronavirus in the fall.

— $10 million for violence prevention and

In other action, aldermen also voted 37-12 to approve Lightfoot’s plan to protect Chicagoans from evictions for an additional two months after the state’s ban prompted by the pandemic ends.

Gov. J.B. Pritzker announced Wednesday that the state ban would remain in place until July 31. City officials had been prepared for the statewide ban to end as soon as July 26.

This is unexpected — the city of Chicago adopted emergency legislation less than an hour ago on the assumption that the ban would end in nine days. https://twitter.com/AmandaVinicky/status/1273327579668381696 …

EVICTION BAN EXTENDED: Illinois’ @GovPritzker announces a statewide moratorium on evictions through July, as a state housing assistance program is getting underway. He says nearly one in three of our neighbors are struggling to pay thier mortgages and rent.

“This is a stopgap measure to help keep people in their homes during the pandemic and try to stabilize our housing stock,” said Ald. Harry Osterman (48th Ward). “Timing is an issue with this ordinance. There’s a moratorium in place by the government of the state of Illinois that, when lifted, could lead to a mass rush of evictions. That is what we are trying to prevent across the city of Chicago.”

Some critics of the plan said it did not go far enough to help renters, while other aldermen who represent the South and the West sides said they feared it would hurt landlords who own two- or three-flat apartment buildings and are in danger of falling into foreclosure.

The measure would require landlords to make a “good faith” effort to work with tenants before moving to evict them if they can show the pandemic made it impossible for them to pay rent, said Marisa Novara, the commissioner of the city’s Housing Department.

The new law gives tenants five days to object to an eviction because they were unable to pay rent because of the economic crisis caused by the pandemic. That notice would trigger a seven-day negotiation period during which landlords are required to negotiate with their tenant in good faith, according to the law.

Landlords should allow tenants two months to pay back every month of missed rent, allow use of security deposits to reduce the amount of rent owed or reach an agreement to allow the tenant additional time to find a new place to live, according to the law.

However, Ald. Brian Hopkins (2nd Ward) prevented a measure from advancing that would restrict landlords’ ability to evict tenants for reasons unless they violate their lease by not paying rent or breaking other terms.

Introduced by Ald. Chris Taliaferro (29th Ward), the measure was sent to the City Council’s Rules Committee, which is known as legislative purgatory.

Aldermen also voted unanimously to allow bars and restaurants to sell cocktails to go — but only until 9 p.m. Outdoor dining establishments would have to stop selling the mixed drinks to go at 11 p.m.

In addition, aldermen approved a measure designed to speed sidewalk cafe permits and launch a pilot program that will close off six streets around the city to traffic and allow local restaurants to expand their operations to offer socially distanced, outdoor seating options.