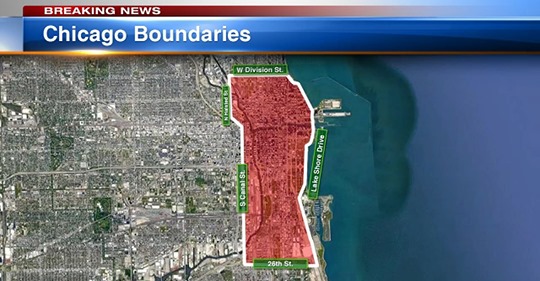 CHICAGO (WLS) — The city of Chicago announced Sunday new precautionary measures to further ensure the health and safety of residents and the hundreds of peaceful protesters participating in rallies over the death of George Floyd.

As part of these efforts, the city announced that multiple routes to the Central Business District will be temporarily reduced following multiple public safety incidents and property damage that occurred overnight.

Starting Sunday, the Department of Streets and Sanitation, Department of Water Management and Chicago Police Department will reduce access in the Central Business District and Loop area to only employees whose businesses are located within the designated boundaries, individuals who reside in the surrounding area and residents engaged in essential activities as defined in the Municipal Code, Order 2020-3.

The following boundaries include:

Additionally, CTA service has also been suspended for trains and buses coming in and out of the Loop for public safety reasons.

Metra also changed its schedule. The commuter rail canceled all trains scheduled to arrive downtown or leave downtown after 3 p.m.

After Sunday’s announcement, the city is working closely with the organizers of rallies and protests scheduled to take place within the area this afternoon to provide an alternative, optional route for marches to peacefully and safely return in Chicago.

Lightfoot, Arwady and Chicago Police Superintendent David O. Brown continue to reiterate that their No. 1 priority is the safety and health of all residents, including protesters and police officers.

“This is an immensely challenging moment for our city, our state, and our country, one born from decades and centuries of systemic racism,” Pritzker said in a statement. “To those peacefully expressing the pain, fear, and rage of this moment, I hear you. Your voices matter. We must address the profound injustices in our society and bring about real and meaningful change.”

According to a press release from the governor’s office, 375 Illinois National Guardsmen were activated for State Active Duty to assist the CPD in “protecting the City of Chicago and its residents.” The guard will carry out a limited mission to help manage street closures and will not interfere with peaceful protesters exercising their first amendment rights, the release said.