Info Forward by Peggy:
Middle-income areas, pictured above in light yellow, made up half the city in 1970. Today, Chicago neighborhoods tend to be, on average, either low income (orange) or high income (blue).

Chicago’s middle class, once the backbone of the city, is declining so swiftly that it’s almost gone, and a set of maps from a local university lays that reality bare.

The dynamic stands to affect nearly everything about Chicago going forward, from politics to schools to who will live here.

“It raises a lot of questions as to what kind of city it will be,” said Janet Smith, co-director of the Nathalie P. Voorhees Center for Neighborhood and Community Improvement at the University of Illinois at Chicago, which compiled the maps that document Chicago’s shrinking middle class — and an increasingly polarized city — over the past five decades.

UIC’s maps show that fully half of the city was middle income in 1970, including large swaths on every side of town. Today, just 16 percent of the city’s 797 census tracts are considered middle income. Those middle income areas are confined mostly to the corners of the city, and to thin strips between areas of wealth and poverty.

Stay up-to-date with the latest news, stories and insider events.

“We have two cities,” said Smith, who notes other cities are headed in a similar direction. “We have the rich and we have the poor.”

For UIC to consider a census tract middle income, the average per capita income there had to fall between $28,712 and $43,068.  (UIC researchers said per capita income is useful for mapping wealth and poverty, but doesn’t necessarily represent what a person would earn.) Median household income in the Chicago metro area is $68,403.

There are lots of ways to define the “middle class.” Here’s how Voorhees Center/UIC researchers defined middle-income earners: Using U.S.Census data, they calculated the average per capita income across the entire Chicago metropolitan region for each year of the U.S. Census, beginning in 1970. A city census tract was considered “middle income” if its average per capita income fell between 80 and 120 percent of the metro-wide average for that year.

Chicago has long been defined by its stubborn racial segregation, but income segregation is “more extreme now” than in the past, Smith said.

Many of the neighborhoods that were middle income in 1970 are now lower income.

“But what’s been more striking is a significant increase in high-income people moving into the city,” Smith said.

When Harry Meyer was growing up in Gage Park, the neighborhood was solidly middle class. Looking back, “we never had any concern. Never missed a meal, never had any worries about that. My mom didn’t work until I was in high school. She stayed home and took care of the house and things.”

Meyer’s dad, a foreman at a local factory, was the family’s sole breadwinner. They lived in the upstairs apartment of a brick two-flat on Rockwell Street that Harry’s grandfather had built. His uncles lived in the apartment below.

Meyer stayed in that home until the 1990s, when he said the whole neighborhood flipped. “It went from 95 percent white to 95 percent Mexican in that 10-year period.”

Demographer Rob Paral said the map of Chicago’s shrinking middle class is partly showing that sort of racial change, which brought with it an accompanying reduction in average incomes.

“When you go back to 1970, the areas that are considered middle income — those were basically white,” Paral said.

Many of those whites headed for the suburbs during the period of white flight, said Paral. In addition, middle-class African-Americans were also on the move, taking advantage of open housing laws to exit slums where they had been trapped. The map’s expanding lower-income areas align with the growth and geographic expansion of Latino and African-American populations, Paral said.

Today, the Arzate family lives in Meyer’s old home. And it’s a similar set-up. Beatriz Arzate, 30, lives upstairs with her husband and their two kids. Her parents, Mexican immigrants, bought the house six months ago and live downstairs with Arzate’s brother.

Beatriz Arzate stays home with the kids. Her husband works at a pallet company, and has a second job at a Spanish-language radio station. Her dad is a local truck driver.

They invited Meyer inside one recent day to see the house he grew up in. He found a modern kitchen and the same front door he ran through as a kid.

Harry Meyer visits his childhood home in Gage Park and talks with Beatriz Arzate and her family, who live in the home today. In 1970, the entire Southwest Side was considered middle income. Today, average incomes in the area are far under what UIC researchers consider “middle income.” (Linda Lutton/WBEZ)

To Meyer, who works as a housing organizer in the area, it all feels similar: “It’s a solid working class neighborhood,” he said.

But Paral sees why Gage Park and almost the entire Southwest Side on UIC’s maps now appears to be lower-income. When the area was white, residents earned about what the average was for the metro area as a whole. Statistically, Latinos earn less than that average.

Paral said if the Arzate family is typical, “I know they’ve got less money. They might look like they’re repeating Harry’s story but there’s no doubt that their income is lower,” Paral said.

Wealth replaces the middle class on the North Side

But Paral said UIC’s income maps are not only about racial change. “It’s also a map of education.”  He said growing areas of wealth on the North Side show a growth of people with higher degrees.

They earn more and are quickly replacing middle-class residents.

Kevin Sullivan, 52, feels like he’s been watching that happen. He and his wife bought a house in North Center in 1992.

“It was [a] family-oriented neighborhood,” said Sullivan. Now, if you’re middle class, “you’re definitely getting squeezed out,” he said.  “The guy across the street — family grew up in that house — they just sold ‘cause they can’t afford the taxes anymore.” 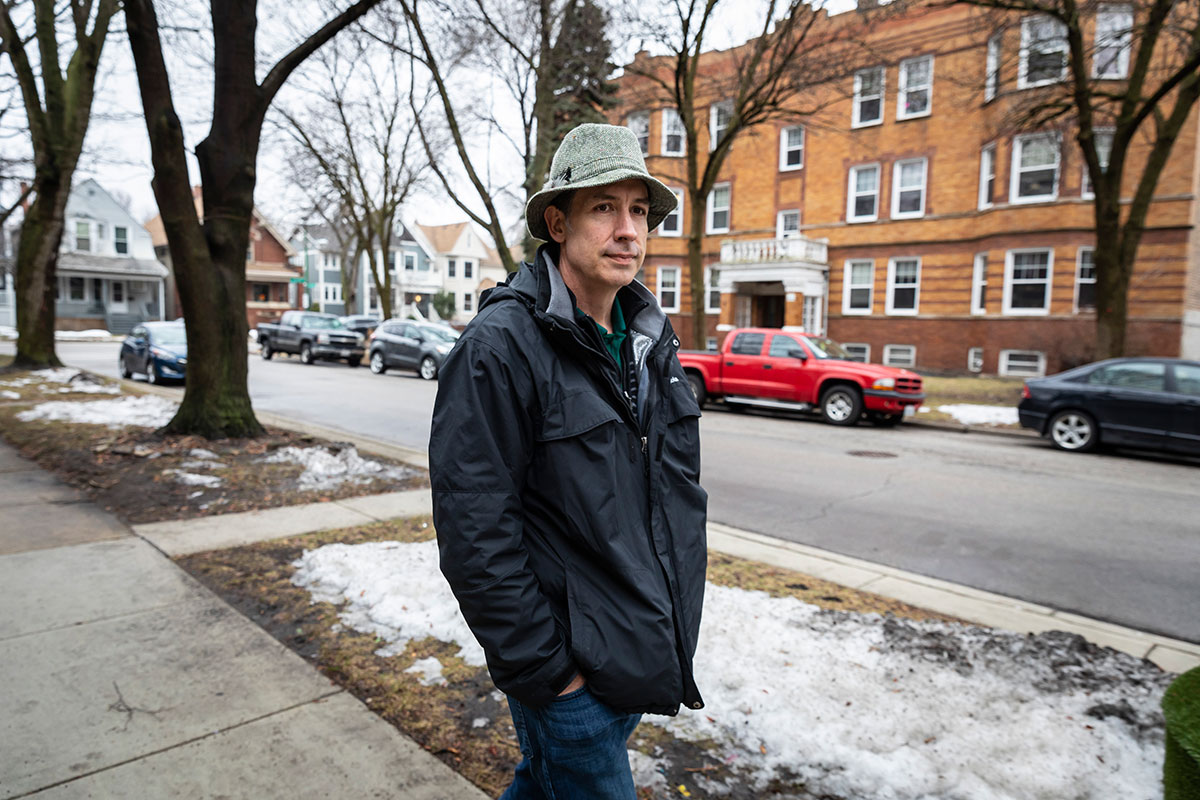 When Kevin Sullivan moved to North Center in 1992, his neighborhood was middle income. By UIC’s calculations, it’s now part of an expanding area of affluence. Average per capita income on much of the North Side now far exceeds the average for the metro area. (Manuel Martinez/WBEZ)

Sullivan, a realtor, has seen people buy half-million-dollar homes nearby that they tear down to use as side yards. Two-flats, which middle-class families could afford because of the rental income, are now regularly converted to single-family homes.

Sullivan is on the board of a local neighborhood association and citizens zoning committee. “And we’re trying to figure out is there a way to save two-flats for lower-income families,” Sullivan said. Right now, even middle-income families would have trouble affording rents in the area. A one-bedroom apartment at the end of Sullivan’s block goes for $1,895 per month.

“I want everybody to be able to live by me,” Sullivan said. He said it was never his goal to be in an ever-expanding sea of affluence, which is what the entire North Side looks like on UIC’s maps.

“I don’t want my kids to grow up like that. I’d rather know people of every walk. I think it makes a better neighborhood if everybody’s got a little different background,” said Sullivan.

Economists said the disappearance of Chicago’s middle class is a reflection of macroeconomic forces, and a shift away from manufacturing jobs to a service economy.

In U.S. cities over the past several decades, “the jobs that were added tended to be at the very high end or at the very low end, “ said Rick Mattoon, senior economist at the Federal Reserve Bank of Chicago.

Chicago has a high share of college educated workers, “higher than the share that’s in the suburbs at this point, which is a historic flip,” said Mattoon.

But highly educated, highly paid workers — attracted in recent years to urban centers — tend to demand a lot of services. Think retail, restaurants, hotels, and entertainment. “And so that creates a big demand for entry level workers.”

Left out of this dynamic are the middle-class manufacturing jobs that used to be heavily concentrated in places like Chicago, Mattoon said.

“It’s a process of economic polarization,” affirmed Rakesh Kochhar, an economist at the Pew Research Center. He’s documented what he calls a “slow but steady” decline in the percentage of middle-income households nationally. In 1970, 61 percent of Americans belonged to the middle class, said Kochhar, “a clear majority.” Using Pew’s methodology, that figure now hovers around 50 percent nationally. 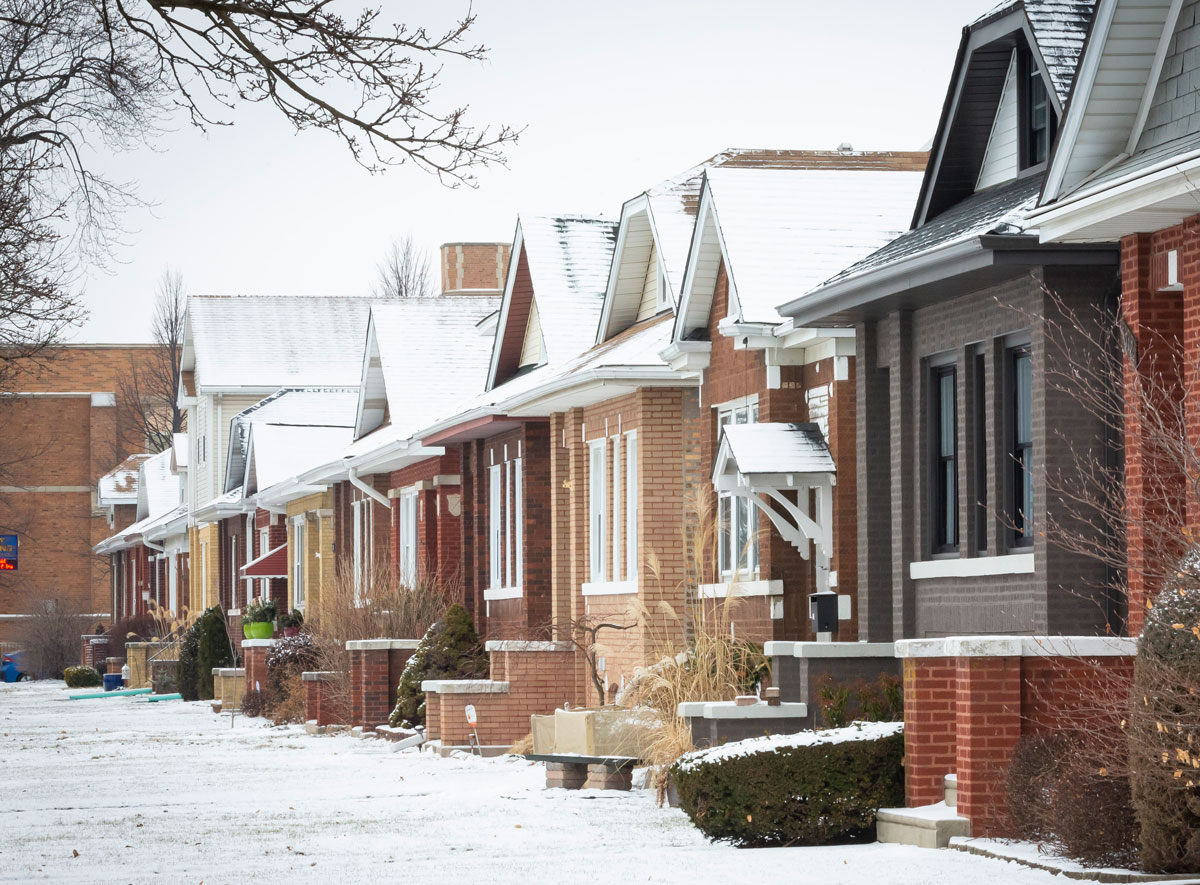 The shrinking of the middle class is directly tied to jobs and wages in the country, said Kochhar.  “There are more people at opposite ends of the income distribution—more at the low end, more at the high end, and fewer in the middle.” Kochhar said 9 in 10 metropolitan areas in the country have lost middle class; about half of those now have more upper-income households, half have more lower-income households.

Asking why the middle class is declining is really a question about why inequality itself is rising, said Kochhar. Economists point to several reasons for that, including technological changes that reward high-skilled workers like engineers or designers but reduce demand for less skilled workers; globalization, including the outsourcing of labor; and the decline of unions.

So what if there’s no middle class? And what can a city do about it?

Paral said having a middle class matters for reasons of equity. “It matters in terms of whether people have a shared experience…. Is life the same for me in my comfortable census tract as it is for somebody else?”

Smith, the UIC researcher, said as the middle class is squeezed out of a growing number of neighborhoods, Chicago, like many cities, has “fewer and fewer children. Less than 25 percent of our families in the city of Chicago have kids. Is it important to have families in cities?”

Smith said  the answer to that question has profound implications for the infrastructure and character of the city. Will we have more private schools and fewer public ones? Will Chicago be a city families visit, rather than live in?

Kochhar, with Pew, said researchers are beginning to find that economic polarization — lack of a middle class — is linked to political and social divisions, and may harm economic growth itself. The opportunity to move up the economic ladder and do better than the generation before also suffers.

Urban planners and economists said there are things cities can do to try to hold onto a middle class, despite macroeconomic winds. Mattoon, with the Federal Reserve, said the city is doing some of those already — fostering advanced or next-generation manufacturing, for instance, and promoting careers in industries like healthcare, which offer lots of middle-income opportunities and paths for advancement. Mattoon said Chicago needs to come up with custom plans for each of its neighborhoods.