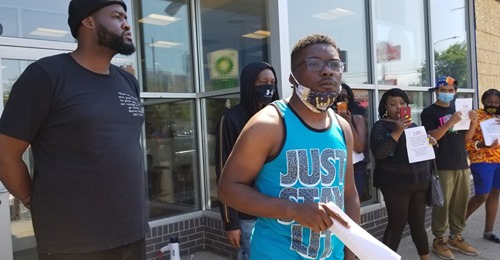 Ja’Mal Green, the 24-year-old activist protesting JPMorgan Chase Bank’s dismal lending record in Chicago’s Black communities, has now been dumped as a customer and barred by the bank from all Chase property.

“Over the past several weeks, our customers and employees have expressed serious concerns about their safety because of your actions at our branches,” read an unsigned letter from Chase’s Global Security department sent to Green by e-mail late Thursday. The letter threatens legal action, if Green does not “stay off and away from any and all” Chase properties. Chase alleges that video shows “physical harassment of customers attempting to enter branches and ATMs,” something Green calls a “blatant lie.”

Chase declined to provide footage or video time stamps of Green or other protesters harassing customers. Green typically livestreams his protests to Facebook. Thousands of viewers have seen each one.

Green and a small group of protesters began demonstrating outside Chase branches last month, after a WBEZ and City Bureau investigation revealed that the bank invested nearly 80% of its home loan dollars in Chicago’s white communities and just 1.9% in the city’s Black neighborhoods between 2012 and 2018. That was the widest racial disparity in home purchase lending of any major financial institution.

Green’s small protests have often involved him entering Chase branches, announcing loudly that the branch will be closing due to protests and encouraging customers to take their money out of Chase due to the bank’s lending record in Black neighborhoods. “If your dollar goes into Chase, you are funding your own oppression,” Green has said.

Chase branch employees have typically responded by waiting for Green to exit, then locking the door and posting a sign saying the branch was temporarily closed due to an emergency. In the last month, Green and fellow protesters have hit branches in Lincoln Park, the South Loop, the Near West Side, Back of the Yards, Englewood, Ashburn, Beverly, Bronzeville, Woodlawn and Chatham. Chase temporarily closed one branch on Wednesday, at 95th Street and Kedzie Avenue, because Green was protesting at another branch 10 blocks away.

Lately, the branch protests have become increasingly tense. Thursday afternoon, Green had barely opened the door to the branch at 87th Street and Calumet Avenue when a security guard tried to physically keep him from entering, saying he’d “already heard about you.” Green filed a police report against the guard, alleging simple battery.

Earlier Thursday, Green and others used their cars to block the drive-thru lanes at the Woodlawn Chase branch at 6650 S. Stony Island Avenue. At least four Chicago police cars responded — at one point police officers outnumbered protesters — and both a police sergeant and Green grew heated.

A Chase spokesman said “whenever there is a disturbance inside a branch that could put the safety of our employees and customers at risk, we engage local law enforcement.”

Chase has tried to engage with Green, a candidate in the 2019 mayoral election, setting up video calls with top executives, including the Chase Home Lending CEO Mark O’Donovan.

“Over the last month, we have held a number of constructive calls and meetings with you to discuss our shared commitments to Chicago’s South and West sides. We will continue to work with community leaders on ways to address longstanding racial disparities in these neighborhoods,” Chase’s letter to Green says.

Green has held fast to a demand that Chase pay $1 billion in reparations to Chicago’s Black neighborhoods, saying it’s not enough for Chase to say the bank will do better without addressing the damage done by a lack of lending.

WBEZ found that if Chase had loaned in Black communities what it loaned in majority-white neighborhoods from 2012 to 2018, that would have meant an additional $829 million each year for Chicago’s Black neighborhoods.

Green vows he’ll keep the protests going despite the order to stay off Chase property. “We’re gonna shut down many, many more branches in this city,” Green told Facebook Live viewers late Thursday. He’s organized the next Chase demonstration for today.