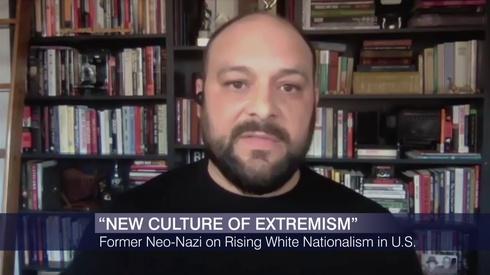 White supremacy and white nationalism have been on the rise in recent years.

Since 2017, the number of white nationalist hate groups has increased by 55%, according to the Southern Poverty Law Center.

This comes as many accuse President Donald Trump of stoking racial divisions with incendiary tweets and statements.

So what’s behind this resurgence of extremism in the United States?

Christian Picciolini is a former member of a white racist skinhead group once based in Blue Island, Illinois. He left the group in the 1990s and has since worked to disengage extremists from hate groups, now under his organization The Free Radicals Project.

He’s also the author of several books, including the recent “Breaking Hate: Confronting the New Culture of Extremism.”

Picciolini says social media and the internet continue to play an outsize role in the proliferation, and rising profile, of white supremacism and extremist ideology.

“When I was recruited 30 years ago, it was very much a face-to-face interaction to be recruited. It was handing somebody a pamphlet, inviting them to a meeting, sitting in a dark alley and having these conversations,” he said. “And quite literally now, in the age that we’re in, the internet has become that digital alley that is open 24 hours a day, 7 days a week, as an all-you-can-eat hate buffet, if you want it to be.”

Since his inauguration in 2017, critics have called out Trump for messaging and policies that they say act as kindling for white supremacist groups.

Most recently on June 28, Trump retweeted — and later deleted — a video of a supporter yelling “white power,” a racist slogan used by white nationalists.

Picciolini says he isn’t sure whether Trump is ignorant or complicit with this kind of messaging. But he says when taken with the president’s policies, the rhetoric shows a clear pattern.