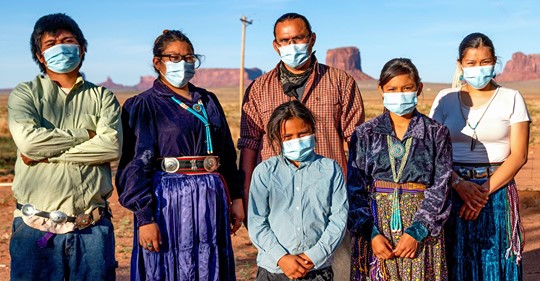 WASHINGTON ― A federal judge on Monday ordered Treasury Secretary Steven Mnuchin to distribute $679 million in emergency COVID-19 relief funds to Native American tribes that should have gotten it months ago, and he chided the agency for causing “irreparable harm” with its delays.

“Continued delay in the face of an exceptional public health crisis is no longer acceptable,” said U.S. District Judge Amit Mehta, who gave Mnuchin until Wednesday to disburse the funds.

Here’s a copy of Mehta’s opinion:

The judge’s order comes after the Treasury Department has blown past deadlines, for months, for distributing coronavirus aid to tribal governments, who have been hit particularly hard by the pandemic. Congress set aside $8 billion for tribes when it passed the CARES Act stimulus package in late March, and directed the Treasury Department to get the money out the door by April 26. That didn’t happen. The agency distributed about $4.8 billion in late May, and most of the remaining $3.2 billion wasn’t distributed until last Friday.

The delays have stemmed largely from the Treasury Department’s incompetence in working with tribes, but a lawsuit over Alaska Native Corporations’ eligibility for funds also complicated matters. The latest problem is that Mnuchin has been withholding $679 million of tribes’ money while a separate court challenge plays out over the agency’s methodology for calculating how much money tribes get.

Mnuchin had argued that he needs to hold on to the $679 million in the event the Treasury Department loses the case and needs to pay out more money to the tribe claiming it was underpaid. But Mehta said Monday that $679 million is “grossly disproportionate” to the amount of money that Treasury could have to pay out ― the tribe in the case claims it was underpaid by $7.65 million ― and there is no court order preventing the agency from releasing that money to tribes.

So, Mehta concluded, Mnuchin needs to release the funds to tribes ― now.

“That amount is being withheld of the Secretary’s own accord,” Mehta said. “The Secretary’s withholding of $679 million ‘to resolve any potentially adverse decision in litigation’ … simply cannot be justified.”

A Treasury Department spokesperson did not respond to a request for comment.

Lawmakers on Capitol Hill praised the court’s decision and fumed that tribes have had to wait this long to get their emergency COVID-19 relief.

“The Court is absolutely correct: this administration has and continues to do ‘irreparable harm’ to Indian Country as it inexplicably holds back funds that Congress intended to get to Tribal governments urgently,” Sen. Tom Udall (D-N.M.), vice chairman of the Senate Indian Affairs Committee, told HuffPost in a statement. “It continues to be a shameful scandal that the Trump administration has dawdled with this funding while people in Native communities are getting sick and dying, and while businesses and essential services are shuttering.”

“It is unconscionable that it has taken court action to force this administration to distribute relief to Tribal governments as Congress intended and the law requires,” said Rep. Ruben Gallego (D-Ariz.), chairman of the Subcommittee for Indigenous Peoples of the United States on the House Natural Resources Committee.

Rep. Deb Haaland (D-N.M.), one of two Native American women in Congress, said it is outrageous that a court had to intervene in order for tribes to get their federal funds.

“Sovereign Nations shouldn’t have to fight for money that Congress approves, ever,” Haaland tweeted. “It’s shameful that a judge has to force the Treasury to do their job.”

Mehta did allow Mnuchin to withhold a bit of the tribal funding: $7.65 million, in the event the tribe claiming it was underpaid wins its case, and an undisclosed amount that is reserved for the case involving Alaska Native Corporations.

A HuffPost Guide To Coronavirus

Do you have information you want to share with HuffPost? Here’s how.