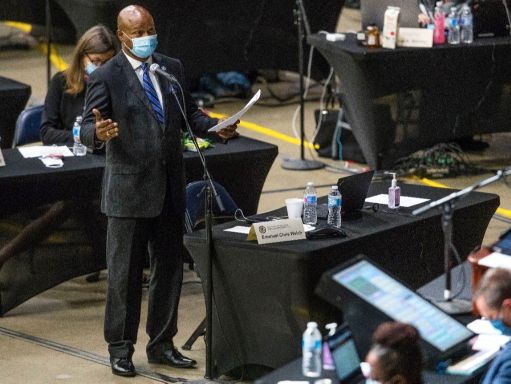 The Illinois House of Representatives on Wednesday elected Rep. Emanuel “Chris” Welch as the state’s first Black speaker and the chamber’s first new leader in decades, marking a seismic shift of power in Springfield, bringing the reign of longtime Speaker Michael Madigan to an end.

“I am grateful and humbled by your friendship, your guidance and your trust,” Welch told colleagues immediately after taking his oath of office.

Welch, a Democrat from Hillside, received 70 votes to Republican Leader Jim Durkin’s 44 votes to win the position. The historic vote makes Welch, who has represented the 7th District since 2013, the first Black speaker of the Illinois House in state history.

Welch locked up support from the caucus to take over the leadership role just minutes before the members of 102nd General Assembly were set to be sworn in and vote for the position.

Madigan had served as speaker for all but two years since 1983, making him the longest serving statehouse speaker in U.S. history. The changing of the guard on Wednesday took place on the 50th anniversary of when Madigan was first sworn into office as state representative for the 22nd District on Chicago’s Southwest Side.

Many of Madigan’s colleagues in the House on both sides of the aisle gave him a standing ovation as he prepared to pass the torch.

“No matter where you stand on the scale of favorability, we must give recognition to whom recognition is due,” Rep. Maurice West said to open his remarks nominating Welch. “Out of respect I ask for a standing ovation for the legacy and service of Speaker Michael J. Madigan.”

Welch lauded Madigan in his own speech, saying, “We have to thank and acknowledge that our state would not be where it is today without Speaker Madigan.”

“Our schools are better, more children have access to health care and our working class families can more easily live the American dream thanks to Speaker Madigan,” Welch continued, noting he had learned from Madigan’s “steadfast leadership.”

In a statement on Wednesday, Madigan thanked his district and members of his caucus “for the faith and trust” they placed in him over the years, as well as his staff for their work, calling his terms “the honor of a lifetime.”

“It is time for new leadership in the House. I wish all the best for Speaker-elect Welch as he begins a historic speakership,” Madigan said. “It is my sincere hope today that the caucus I leave to him and to all who will serve alongside him is stronger than when I began. And as I look at the large and diverse Democratic majority we have built—full of young leaders ready to continue moving our state forward, strong women and people of color, and members representing all parts of our state—I am confident Illinois remains in good hands.”

Madigan suspended his campaign for another term as speaker on Monday after he received 51 votes in the full Democratic Caucus’ first vote, falling short of the 60 needed.

At least 60 votes were required to win the speakership, with Democrats holding 73 seats to Republicans’ 45 in the House.

Once Madigan suspended his reelection effort, members of the Legislative Black Caucus then backed Welch for speaker shortly thereafter in a closed-door meeting Monday night. Welch said Tuesday he was “honored to be called upon” by his colleagues in the caucus.

“This historic moment in Illinois and across the country calls for new representation and unity of democratic beliefs,” Welch said. “I want to thank Speaker Madigan for his leadership – it has been a challenging year for us all but I am grateful for his commitment to serving the public.”

The Black Caucus members had previously announced their support for Madigan for another term, saying in December that the group felt Madigan – before he suspended his campaign – could help “deliver” on their priorities as the embattled lawmaker faced an uphill battle to retain his post.

Welch prevailed over a field of five other candidates: Madigan, as well as Reps. Jay Hoffman, Ann Williams, Stephanie Kifowit and Kathy Willis – all of whom suspended their campaigns after failing to reach the threshold of support needed in four votes the Democratic Caucus took in multiple closed-door meetings.

Sources said Madigan on Tuesday night had already begun moving items from the desk he’s held for nearly 40 years. The end of Madigan’s time as speaker was foretold in November, when a total of 19 Democrats in the House announced that they would not support him for another term.

A majority of those 19 members of Madigan’s caucus who publicly came out against his reelection effort did so in November after two former ComEd executives and two consultants, one a longtime Madigan associate and confidant, were indicted on multiple federal charges related to the alleged scheme to influence Madigan – identified in the indictment as “Public Official A” – in exchange for legislation favorable to the utility giant, prosecutors say.

Those charges came months after federal prosecutors filed a deferred prosecution agreement with ComEd in which investigators revealed that the utility company agreed to pay $200 million dollars in fines and admitted to arranging jobs and payments for associates of an elected official, referred to only as “Public Official A,” from 2011 to 2019 to curry favor with the official.

Madigan has not been charged with any criminal wrongdoing and has repeatedly denied the allegations laid out by prosecutors, saying in part that if the conspiracy to influence him did occur, “it was never made known” to him and if it had been, it “would have been profoundly unwelcome.”

Questions still swirled Wednesday over Madigan’s role in the legislature – will he be a member of Democratic leadership? How much sway might he have with Welch as the new speaker navigates the role?

Madigan also still chairs the Democratic Party of Illinois, which he – a prodigious fundraiser – has used to protect his majority in the House for years. Will he continue in that role?

Another issue soon to arise: this year, following the 2020 census, the legislature is tasked with redistricting – a task Madigan has helmed, redrawing maps of congressional and legislative districts. Will he still oversee or be part of that process?

That all remains to be seen, and while many questions were left unanswered in Wednesday’s vote, the day’s events certainly marked the end of an era in Illinois.