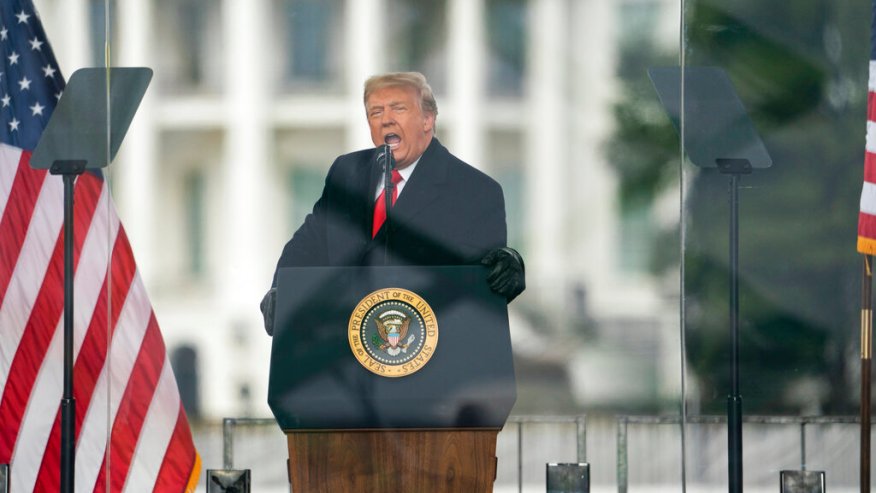 President Donald Trump speaks during a rally protesting the electoral college certification of Joe Biden as President, Wednesday, Jan. 6, 2021, in Washington. Trump enters the last days of his presidency facing a second impeachment and growing calls for his resignation after his supporters launched an assault on the nation’s Capitol in an effort to disrupt the peaceful transfer of power. Yet Trump will try to go on offense in his last 10 days, with no plans of resigning. Instead, Trump is planning to lash out against the companies that have now denied him his Twitter and Facebook bullhorns. And aides hope he will spend his last days trying to trumpet his policy accomplishments, beginning with a trip to Alamo, Texas Tuesday, Jan. 12, 2021. (AP Photo/Evan Vucci)

WASHINGTON (KTVX) — The U.S. House of Representatives voted to impeach President Donald Trump Wednesday, which makes him the only president in the nation’s history to have been impeached twice.

However, it will take more than impeachment to strip Trump of certain benefits afforded to former presidents when he leaves office on Inauguration Day. That would take an additional step: conviction by the Senate.

And a Senate trial likely wouldn’t happen until after Trump leaves office on January 20.

“Impeachment is like an indictment – an accusation,” Dr. Richard Davis, professor of political science at Brigham Young University, said. “The removal only comes after the Senate trial and vote, and in no case has that happened in the past.”

Trump urges ‘NO violence, NO lawbreaking’ in response to ‘reports of more demonstrations’

James Curry, associate professor of political science at the University of Utah, said there are certain benefits that the president would only lose if the Senate removed him from office before January 20.

“The Former Presidents Act provides ex-presidents with a number of benefits, including a $200k annual pension, a travel allowance, lifetime Secret Service detail, and more,” he says. “However, the president would lose some of these things if the Senate voted to remove him from office before Jan. 20. He would lose the pension and other monetary benefits, but not the Secret Service protection.”

Wednesday’s impeachment opens the door to a trial in the Senate, during which he can actually be convicted.

Again, if he is impeached, the president would likely be convicted after leaving office, so he would keep all benefits with the exception of the chance to stay in office.

Davis says that would be the biggest cost to Trump – losing the chance to run for office again in 2024.

“I don’t think the benefits matter to him. He is very wealthy already. He doesn’t need the pension money or any of those things, but the real cost here is that he cannot run again. If he was at the end of his second term it wouldn’t matter,” Davis said. “But he’s not, and he’s talking about running in 2024.”

Certain benefits at stake for an impeached president

According to Davis, the president’s very public actions and statements, which are at the heart of the incitement charge, make this impeachment different than proceedings for past presidents.

“It’s not like Watergate or even like Monica Lewinsky or the one that happened last year where evidence had to be presented regarding what he had done,” he says. “In this case, it’s all very public acts that the president engaged in.”

Curry says the president has things to lose from the impeachment alone as well.

“If Republicans in the House and Senate turn against him and vote to impeach, remove, or disqualification, that would be a sign he has lost political standing and clout in the GOP,” he said before the vote Wednesday, during which 10 House Republicans voted to impeach. “He also stands to lose his future historical reputation. Donald Trump may shortly be the first president ever to be impeached twice. This is certainly not an honor.”

What’s next in the impeachment proceedings? The Senate gets to make two choices, Curry explained.

“First, they vote on whether or not to convict the impeached official and remove them from office. If removal is agreed to, the Senate can then consider whether to also disqualify the president from holding federal office in the future … Removal requires a 2/3 vote in support in the Senate,” he said.

“Since Trump will no longer be president by the time the Senate convenes a trial on his impeachment, disqualification may be the only thing on the table, which could make things interesting.”