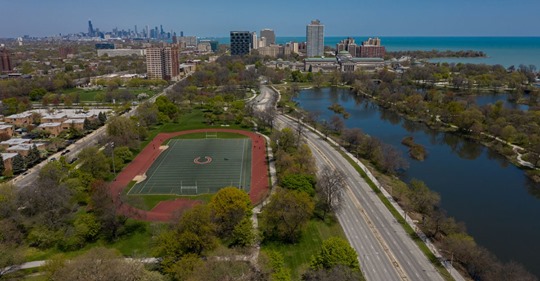 A lawsuit over the planned Obama Presidential Center’s campus in Jackson Park has stalled after a federal appeals court panel ruled the plaintiffs did not suffer actual harm and that much of their grievances were not within the court’s jurisdiction.

The 7th Circuit for the U.S. Court of Appeals issued the ruling on Friday, more than two years after community group Protects Our Parks Inc. filed suit alleging the Chicago Park District and the city of Chicago improperly transferred public parkland to the Obama Foundation for private use. The decision to remand the case means the lawsuit is effectively dead — although one of the plaintiffs said Tuesday the legal fight will continue.

“We are pleased the court ruled in our favor on the federal claims, and if plaintiffs persist in litigating the state claims that the district court found without merit, we will continue to defend our position,” Kathy Fieweger, the city’s law department director of public affairs, said in a Tuesday statement.

Among other things, Protect our Parks argued the $500-million, four-building complex’s proposed location on 19.3 acres of the historic Jackson Park violates the public trust doctrine governing use of public land for the greater good of citizens, according to the lawsuit.

The pending litigation, along with a lengthy federal review on how development will impact a park listed on the National Register of Historic Places, halted construction on the campus for years. An official opening date for the presidential center remains elusive.

“We are pleased with the panel’s ruling in favor of the city in this lawsuit and remain eager to deliver on the many community and economic benefits of the Obama Presidential Center,” an Obama Foundation official wrote in a Tuesday statement. “We appreciate the inputs and involvement of the thousands who participated in the rigorous public process the panel referenced in its decision.”

Last year, U.S. District Judge Robert Blakey dismissed the Protect Our Parks suit, ruling the center offers “a multitude of benefits to the public.” But the group appealed, leading to a three-judge appellate panel hearing in May.

On Friday, the panel decided the plaintiffs did not have the standing to argue the city’s agreement with the Obama Foundation violates the public trust doctrine, according to the ruling.

The panel also agreed with the district court’s dismissal of the argument that the transfer of public park property violated the Fifth and 14th amendments. It ruled the plaintiffs failed to prove they have a private property interest in Jackson Park that would render its sale to the Obama Foundation as unconstitutional.

Herbert Caplan, founder of Protect Our Parks, said in a phone interview that the group plans to file a motion for rehearing. Should that falter, Caplan said he remains hopeful of a long-shot chance at consideration by the U.S. Supreme Court.

“From the moment I researched this case and we decided to file a lawsuit, I didn’t think there was any doubt that we were right,” Caplan wrote. “I still think that all the arguments that we had raised in the complaint were never really countered or answered, and they’re of such importance that they need to be addressed. And that’s what keeps us going.”

The Obama Presidential Center is expected to be a sprawling campus that will house the Obama Foundation offices and include spaces for large gatherings, an athletic center and a public library branch. In addition, the campus will have outdoor recreation areas including a sledding hill and walking paths.

The city and advocates have touted the project as a jobs creator that has the potential to serve as a beacon of the South Side by attracting tourists and possible investors to long-overlooked communities. But the Protect our Parks lawsuit and the lengthy federal review process mired the project in a series of starts and stops. Now, with both of those issues nearing their end, the presidential center’s construction might see its beginning.