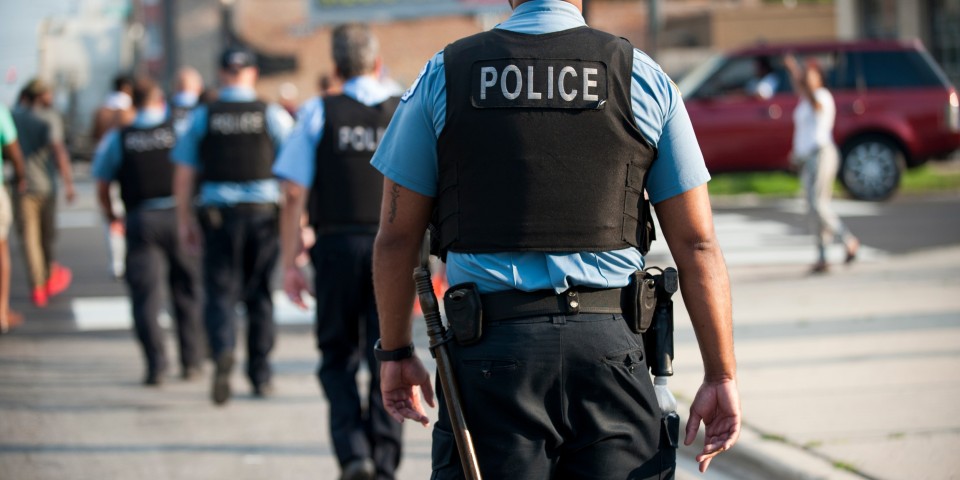 This story is a reporting partnership between WBEZ and Chalkbeat Chicago, a nonprofit news outlet covering public education. https://www.wbez.org/stories/cps-agreed-to-pay-school-police-officers-full-salary-and-pensions-up-to-150000-per-year/f91bac89-2f1b-4c8e-b8c8-383c7a5a3bcc?utm_source=facebook&utm_medium=social&utm_campaign=wbez

In the midst of a heated debate last year about whether police officers should work in Chicago’s public schools, district leaders agreed to pay up to the full salary and benefits of staff assigned to the $33 million program, even though they are police department employees.

Chalkbeat Chicago and WBEZ have learned that the school district agreed to pay $152,000 per police officer and $172,000 per sergeant on a 12-month contract. School is in session for 10 months, and officers have other police department duties during the summer months and other times they are not in schools.

On Wednesday, in response to months of reporters’ questions and multiple Freedom of Information Act requests, Chicago Public Schools said that it will only pay for the time the police officers and sergeants worked on the school program and it won’t be charged for the months when school was closed due to COVID-19.

The district said it is conducting a “reconciliation” of costs for the 2019-20 school year, and that it hasn’t paid the Chicago Police Department yet. The school district was supposed to pay in two installments, in December 2019 and June 2020, according to the contract.

The new details raise questions about a new school police contract, which the school board is expected to vote on in late August.

Protesters have taken to the streets repeatedly since June after the police killing of George Floyd in Minneapolis — part of a national outcry — and called for the removal of police officers from school campuses. They’ve also pressured the district to spend the money to support students with more social workers and counselors. Earlier this summer, the Chicago Board of Education voted down a measure to terminate the contract by a narrow majority.

Activists, who have been pushing to remove police officers, have pressed the school district to use the $33 million spent on school police for other support staff in schools. The budget sets aside money to pay for 192 officers and 22 sergeants. That money could, for instance, pay for the salaries and benefits of at least 311 counselors or social workers. Their average pay and benefits is about $107,000 each, according to a WBEZ analysis.

Mayor Lori Lightfoot and schools chief Janice Jackson have said they prefer to leave the decision to keep or remove police officers to individual schools, with local school councils voting on the issue. So far, three have decided to remove them while at least 18 have voted to keep them, according to a tally being kept by Chalkbeat.

The district has said, however, that the schools who vote to remove police officers will not get the money back for their budgets.

All but one of the school board members either declined to comment or did not reply to a request for comment on the SRO budget. Several of them asked for a breakdown of the costs at their June meeting and said they have yet to receive one.

But School Board President Miguel del Valle said next year’s contract will look different than this year’s.

“Stay tuned — this is still being worked on,” del Valle said in a recent interview.

The district’s chief of safety and security Jadine Chou also told aldermen at a hearing earlier this month that last year’s budget is being “audited” and this year’s will be “right-sized.”

Youth activists who are leading the charge to remove police from schools have long criticized the lack of transparency surrounding the program. Meyiya Coleman, a youth organizer with Voices of Youth in Chicago Education (VOYCE), said her group has been asking the school district for a breakdown of the school police budget for years.

“It is important for us to know how the money is spent because taxpayers are funding the police and our taxpayers are the ones who are also sending their children to school,” said Coleman, a CPS graduate.

Breaking down the $33 million contract

In response to multiple requests from WBEZ and Chalkbeat, the district released a “cost breakdown” spreadsheet that details police officer personnel costs, including salaries, benefits and pension obligations, that amount to $33 million. That’s the maximum amount CPS is authorized to spend on the year-long school police contract.

The Chicago Police Department and the city Department of Finance said they didn’t keep a detailed breakdown of the school police budget.

The spreadsheet released this week shows CPS budgeted the annual average salary for each of 192 officers stationed in schools or in roving cars of $87,000 a year, plus $65,000 in benefits.

The benefits per officer include $40,000 in contributions for pensions, $13,000 for healthcare and $1,800 for a uniform allowance, among other miscellaneous costs. For the 22 school sergeants, the district pays a base salary of $101,000 plus $71,000 in annual benefits, for a total cost of $173,000 per sergeant, including pension and medicare costs.

By comparison, the average cost of benefits for counselors is half of what CPS is contributing for police officers. About 13 schools have conflict resolution specialists whose total salary and benefit package is about $80,000. Most schools in the school resource officer program are assigned two officers, for a total cost of up to $304,000.

Ald. Chris Taliaferro, 29th ward, who heads the public safety committee, said the school district should not be paying for the benefits of police officers.

“They are still Chicago police officers, employed by the Chicago Police Department,” Taliaferro said. Instead, that additional funding could go to school counselors or restorative justice supports, he said.

When officers are not serving in schools during the summer, they return to their district of assignment, police officials said.

The Chicago Police Department said it also picked up the costs to implement some of the recent school police changes required by the federal consent decree this year, including new school-specific training and reviewing the disciplinary histories of officers already working in schools. The department declined to say how much that training cost.

How much CPS is paying and should be paying the Chicago Police Department for the SRO program has long been controversial and political. Under Mayor Richard M. Daley, who started the SRO program in the early 1990s, the city mostly picked up the costs, though it went back and forth.

Then, in 2012, with the city facing a budget shortfall, the new mayor, Rahm Emanuel, insisted CPS pay $58 million for unspecified security services provided for an unspecified amount of time before Emanuel was mayor. Part of his reasoning was that CPS was not paying the full cost of police stationed in schools.

The amount the school district has agreed to pay to the police department has fluctuated over time — $33 million is one of the highest amounts — despite decreasing numbers of police officers assigned to schools. Also, it is unclear what CPS has been agreeing to pay for and whether that has ever included complete benefits for each officer and sergeant.

Later in Emanuel’s tenure, with CPS facing a budget shortfall, the mayor decided the city would pick up security costs, including its payment to the police department.

The SRO program’s budget “has been historically a moving target,” said Laurence Msall, president of the Civic Federation, a budget watchdog group. “Now you have Mayor Lightfoot and the City Council attempting to both rationalize and account for this cost.”

Experts note that the public school system paying the police department for services is not like a government agency paying a contractor after it submits an invoice. Funds are likely transferred between departments at the city level because both the public schools and the police are funded through property taxes.

Msall also said a cost breakdown of the budget does not tell the public whether the school district is being charged proportionally to the services it is receiving.

There’s no best practice for how police officers who are assigned to schools should be paid.

Mo Canady, executive director of the National Association of School Resource Officers, said there are as many approaches to school police budgets as there are school police units. Many share costs, but Canady, who trained Chicago police officers in school-specific work last fall, said there is no strong agreement that one approach is better than the other.

The Chicago Board of Education will vote on the school police contract as it looks to an uncertain budgetary future. Chicago Public Schools has spent about $55 million responding to the coronavirus crisis so far, with about $25 million on technology, a portion of which came from federal emergency funds released to respond to COVID-19 needs.

State funding will hold steady this year, but the district won’t get the increase it expected and increases could be threatened in coming years. Meanwhile, its costs continue to rise. The federal government also has threatened to tie funds for reopening school campuses to in-person learning.

In fact, CPS CEO Janice Jackson said if the board of education had voted to cancel the contract with the police, she could have used the money to help balance the school district’s budget.

When considering where to cut, some observers say the school police budget could be an option, especially if fewer students are in school next year because of the pandemic.

Msall agrees. “I think the real question is: ‘Is the only way to maintain security in schools for the Chicago Police Department with sworn officers with the right to have a gun in the school?’” he asked. “Certainly, we’ve seen that there is an enormous need for more social workers, more counselors, more services, mental health services for the students.”

As pressure continues from movements to defund police, F. Chris Curran, an associate professor at the University of Florida who has studied school discipline and safety, said he expects to see school districts try to balance their budgets in part through responding to calls to change police funding.

If the school district responds to the pressure to change its police program, Curran said, he expects it “will perhaps alter the way in which school police are operating, or scale them back a little bit, without doing away with them entirely.”

Other cities have taken different approaches in response to calls to end school policing that have intensified in the wake of the Floyd killing.

In Los Angeles, the school board voted in June to cut the $70 million school police budget by $25 million, resulting in the layoffs of 65 officers and the elimination of overtime pay. That money will instead be reinvested into social workers and counselors, a key demand of the movement agitating for the change. In New York City, Mayor Bill de Blasio has planned to give school police more money.

Yana Kunichoff is a reporter for Chalkbeat Chicago. You can follow her on Twitter @yanazure or reach her by email at ykunichoff@chalkbeat.org