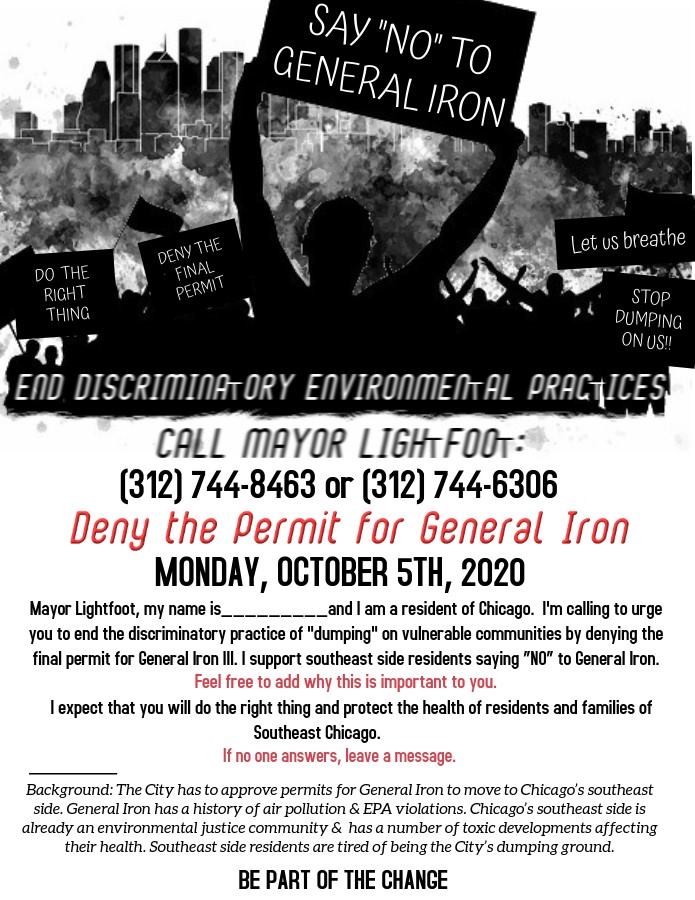 By Olga…Lightfoot Administration Silently Issues One of Three Permits to General Iron as Over 40 Local Groups Demand City Deny its Move to the Southeast Side NAACP, League of Women Voters, Illinois Poor People’s Campaign Are Among Over 40 Groups Calling on the Mayor to End Environmentally Racist Policies that Add Polluters to City’s Under-resourced Areas MONDAY, More than 40 local labor, community, faith, youth and environmental organizations, including the NAACP, League of Women Voters and Illinois Poor People’s Campaign, will call on the City of Chicago to deny recycling and air operations approvals for General Iron’s proposed Southeast Side facility. The City of Chicago recently issued an air permit to construct the facility, seemingly without any public comment or community input. Residents continue to demand transparency and community engagement from city officials, including 10th Ward Alderwoman Susan Sadlowski Garza. A growing number of local organizations are urging the city to address long-standing environmentally racist policies. Groups are calling on the city to deny the permits that General Iron would need to move to the Southeast Side because of the existing pollution threats that continue to burden residents. The proposed site would be next to residential areas, schools, parks, and the Calumet River. The city air construction permit approval comes two months after the city released an air quality report recognizing the disparate environmental burden borne by the Southeast Side and purportedly committing to address them. As the city draws plans to address underserved communities like those on the South and West Sides, groups are calling on city officials to also address environmental policies that further intensify that divide.