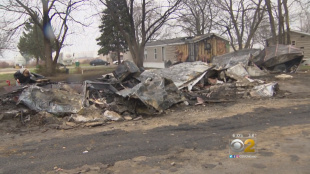 CHICAGO (CBS) — He loses everything he owns, but personal possessions are not all.  Seven of his beloved family pets die when his mobile home is consumed by fire.

Now, the community is coming together to help a Hegewisch man.

CBS 2’s Suzanne Le Mignot has the story, in this Original Report.

David Perez has friends help him salvage anything they can find in the rubble, that was once his mobile home.  Perez remembers receiving the call, Friday night at work and through the phone he said, “I heard the sirens and grabbed all my stuff and I ran out to get home.”

“I ran maybe halfway down the road and as soon as I saw what was left, I just collapsed,” Perez said.

Perez holds down three part-time jobs, among them, working at doggie daycare.

The avid dog lover, lost seven of his nine dogs in the fire that consumed his home.

“The way that I found the dogs, is what kills me the most!” Perez cried. “It’s like the one thing I looked forward to coming home every day. Thank God, the one officer was able to get two of them out.”

A Chicago police officer broke down the front door, saving Winkie and Hope.

The day before the fire, Perez bought this mobile home down the street with the goal of moving in. He had no insurance on the one that went up in flames.

Hegewisch resident Karen Wojciekowski heard about Perez’s plight and saw the GoFundMe page that has been set up to help him buy new appliances. And she had a surprise for him.

“I’m going to give you some cash, that’s from us,” Wojciekowski said.  “This is from the neighbors too. We got you some clothes and other stuff.”

Good Samaritans from the Southeast side and suburbs have also helped Perez.

“The whole Hegewisch community is behind him and we’re going to help him, no matter what,” Wojciekowski said.

“The gratitude that I feel,” Perez said being very grateful.

Perez continues to express his gratitude to good Samaritans who have also helped. The GoFundMe page, has already raised more than $2,000.

The cause of the fire is still under investigation.

Hegewisch Community Helps Man After Fire Takes Everything He Owns

Hegewisch Community Helps Man After Fire Takes Everything He Owns