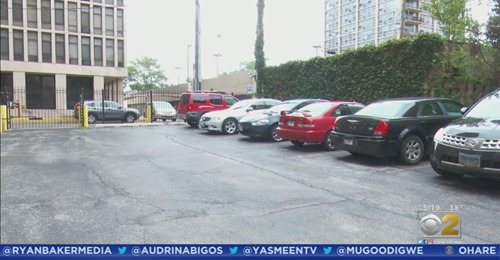 CHICAGO (CBS) — Residents of a low-income senior living facility are out hundreds of dollars after management had their cars towed from the lot.

The manager said the senior drivers broke the rules. But the drivers told CBS 2’s Tim McNicholas it should have been handled much differently.

The Senior Suites of South Shore advertises affordable housing at 67th Street and Oglesby Avenue, near the south end of Jackson Park.

“It make me feel terrible, because I’m a senior and I had to use somebody else’s money,” said Eunice Lyles.

But Lyles said it is a little less affordable when you have to deal with a $218 towing fee.

“I was given by friend here, and my daughter helped me to get my car out of the towing,” Lyles said. “I have to give those people their money back.”

Lyles said management had her car towed because she didn’t have her parking sticker in the window, part of a rule that went into effect this month.

The 88-year-old said she remembers filling out a form weeks ago, but not getting a sticker.

“I feel that if she had given me a sticker I would have put it in the window,” Lyles said.

She got a warning dated on Sept. 15, saying her car could be towed and the stickers were given to everyone more than a month ago.

But her car was towed the morning of Sept. 16 and she said she didn’t see the warning until afterward.

“We should be considered as senior people, not just any ordinary people. We need help,” Lyles said, “and if we don’t get the help from this one that is managing the building, who going help us?”

Charlene Smith said she asked the manager why they had to tow her car too.

“I never remembered to put it in the window,” Smith said.

She said she was told her car was towed because someone was parking in the lot who was not supposed to be there. But that someone was not she.

“I said that was a smaller situation; that having all of us towed, she should have found out who that one person was,” Smith said.

That manager called McNicholas and read a written statement saying residents did not follow certain rules – and steps had to be taken.

But McNicholas pointed out that response did not really answer anything in terms of why the cars were towed in the fashion they were.

The manager would not answer further questions, and neither would the corporate office, when we asked why they couldn’t just walk down with Lyles and the others to make sure to put their sticker in.

Leonard Miles attends the same church as Lyles. He said he picked her up to help her out, and wound up driving two other seniors to help retrieve their cars.

“They’re not as sharp as they used to be, and you have to take time and explain to them more clearly,” Miles said.

But now, they want an explanation from management.

It is not clear how many people were towed. Miles said he knows of at least four.

The residents said they are hoping to get reimbursed, but the warning letter from Sept. 15 said that would not be an option.