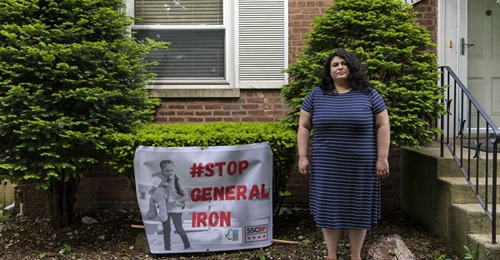 Sun-Times Why does one side of town get Lincoln Yards — while the other gets a scrap yard?

Our elected leaders — whether in Washington, Springfield or in City Hall — need to stand up for the Southeast Side.

There is the elegant Lincoln Yards. And then there is the scrap yard.

Guess where each is heading in Chicago?

The scrap yard, operated by a company with a long record as a polluter, General Iron, is on its way to the poor Black and Brown Southeast Side, moving down from the whiter and wealthier North side. Worse, Illinois Gov. J.B. Pritzker and Chicago Mayor Lori Lightfoot have provided a regulatory express lane for the scrap yard to move, despite campaigning as progressive champions.

Our elected leaders — whether in Washington, Springfield or on the fifth floor of City Hall — need to stand up for our community like they have for others. Environmental racism is alive and well in Chicago, and it must end.

General Iron currently sits along the east bank of the Chicago River’s North Branch. It shreds metal and pollutes next to family homes, schools and playgrounds. The list of federal, state and local violations over the years is long. In May, it was the site of not one but two explosions that shook homes and sent plumes of smoke into the air. Just a few years ago, there was a similar explosion.

Even President Donald Trump’s U.S. Environmental Protection Agency thinks General Iron is a problem, last year placing the business under a consent order. But not our governor or mayor; they haven’t taken action to protect our community. The Illinois EPA has issued permits for General Iron to operate on the Southeast Side, and city officials have signaled that once they get General Iron’s application, they will issue the necessary city permits.

One of the worst pollutants General Iron spews is “fugitive particulate matter.” This toxic insulation-like fluff makes it harder to breathe, even as we are fighting a virus that attacks the respiratory system. And as we’ve seen so clearly and sadly with COVID19, Black and Brown people have taken the biggest hit. Our people suffer from higher rates of chronic diseases — asthma, diabetes, high blood pressure — that are often caused or exacerbated by pollution.

General Iron has gotten everything they have wanted from our leaders by playing Chicago’s favorite game of using clout-heavy lobbyists to knock down opposition.

General Iron’s team has met with the city leadership regularly, but not a single member of the environmental community or local resident has been in on those discussions.

Now is the time to stop this environmental racism.

The easiest solution would be for the city to not issue the permits General Iron needs. Or the city could place a moratorium on permits for polluters. This is Mayor Lightfoot’s chance to stand with our community and against environmental racism.

The governor, as well, could exercise his authority to put a halt to this. Two years ago, he stepped up to shut down Sterigenics, which was using a carcinogen in its operations in largely white Willowbrook. His administration used existing law to do it. He could so as well to stop General Iron.

We need Mayor Lori Lightfoot and Gov. J.B. Pritzker on our side. Until then, the South side will keep getting the scraps.