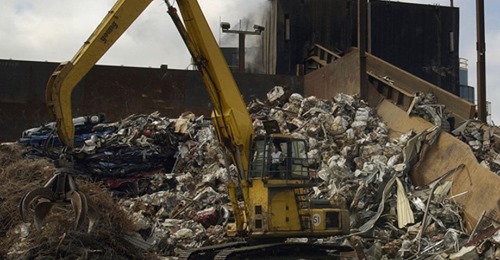 Statement by Olga Bautista: Just a few moments ago the Southeast Side Coalition to Ban Petcoke, the Southeast Environmental Task Force and the People for Community Recovery filed a Civil Rights Complaint to the Feds/HUD against the City of Chicago for their role in assisting the giant metal shredder, General Iron, move from the wealthy predominantly white Northside to our community.

City’s role in relocating General Iron from Lincoln Park to a majority Latino neighborhood is one of many actions that violate civil rights, complaint alleges.

The city of Chicago’s role helping General Iron move from affluent white Lincoln Park to a majority-Latino Southeast Side neighborhood to make way for the Lincoln Yards redevelopment violated federal fair housing laws and should be investigated, community groups say.

The move is an example of years of unfair zoning and land-use practices that discriminate against Black and Latino residents while benefiting white neighborhoods that have seen their home values soar, the groups said in a complaint filed with the U.S. Department of Housing and Urban Development Wednesday. These longtime practices violate the U.S. Fair Housing Act and the city should be ordered to change the way it plans and zones for industrial operations that pollute, the groups say.

“The city has unlawfully discriminated against protected classes based on its long history of moving industrial uses to low-income communities of color,” the complaint alleges, noting an agreement in September 2019 between the city and General Iron laying out the business’ move to the East Side community to make way for the planned $6 billion Lincoln Yards residential and commercial development in Lincoln Park.

The city supports General Iron’s move to the Southeast Side, the complaint said, despite years of complaints and city actions alleging pollution and nuisance violations in Lincoln Park. The North Side facility has been the source of noxious fumes, explosions, dust that carried outside the boundaries of its operation and a substance called auto shredder fluff which is created by the shredding of junked cars, the groups said.

The city receives various types of funding from HUD, the complaint notes. As part of its funding agreement, the city must abide by the Fair Housing Act. If HUD agrees to investigate, it could pressure the city to review its planning and development.

A HUD spokesman said the agency is reviewing the complaint, which was filed by the Southeast Environmental Task Force, the Southeast Side Coalition to Ban Pet Coke, and People for Community Recovery.

The groups charge Chicago has a “long and infamous history of segregation” and Chicago ordinances allow heavy industrial operations close to homes, schools and parks.

The complaint said the city’s role planning for Lincoln Yards development in Lincoln Park was discriminatory as Mayor Rahm Emanuel’s administration and the Chicago City Council helped move heavy industrial operations, such as General Iron, to low-income Black and Brown neighborhoods. In their complaint, the groups cite city emails, obtained through open records requests, that they say prove the Emanuel Administration showed favorable treatment to General Iron and then-owner the Labkon family. Over more than 20 years, the Labkons made hundreds of thousands of dollars in political donations, including contributions to Emanuel, state election board records show.

Mayor Lori Lightfoot and the City Council continue to carry on discriminatory practices, the complaint alleges. The groups use language from the Lightfoot administration’s own recent report on air quality across Chicago that states “structural racism and economic hardship” contribute to an equity gap in the city “making it more likely for certain people to live in polluted communities.”

An agreement signed almost a year ago between the Lightfoot Administration and General Iron was a “triggering action” for the discriminatory fair housing complaint, the groups said. That agreement helps General Iron leave its longtime North Side home by the end of the year.

In a statement, a Lightfoot spokeswoman reiterated a recent promise from the mayor to back a zoning reform ordinance, calling it a “first step toward addressing our city’s long-standing issues related to environmental justice.”

The complaint notes other areas of the city that landed industrial operators as a result of the Lincoln Yards redevelopment, which replaces an industrial corridor that long operated on Chicago’s North Side.

A. Finkl & Sons steel company moved to 1355 E. 93rd St. in predominantly Black Burnside, for instance. The city is relocating its fleet operations where city vehicles, including fire engines and garbage trucks, are maintained and repaired to Englewood, a community that is almost 98% Black.

In the past, city officials emphasized the economic development and new jobs that would come with the moves, but the complaint alleges “the city’s primary role in enabling the relocations occurred in response to significant public pressure by Lincoln Park residents and elected officials.”

“Land-use practices in Chicago have been discriminatory,” said Cheryl Johnson, a longtime activist and executive director of People for Community Recovery. “That is totally racism.”