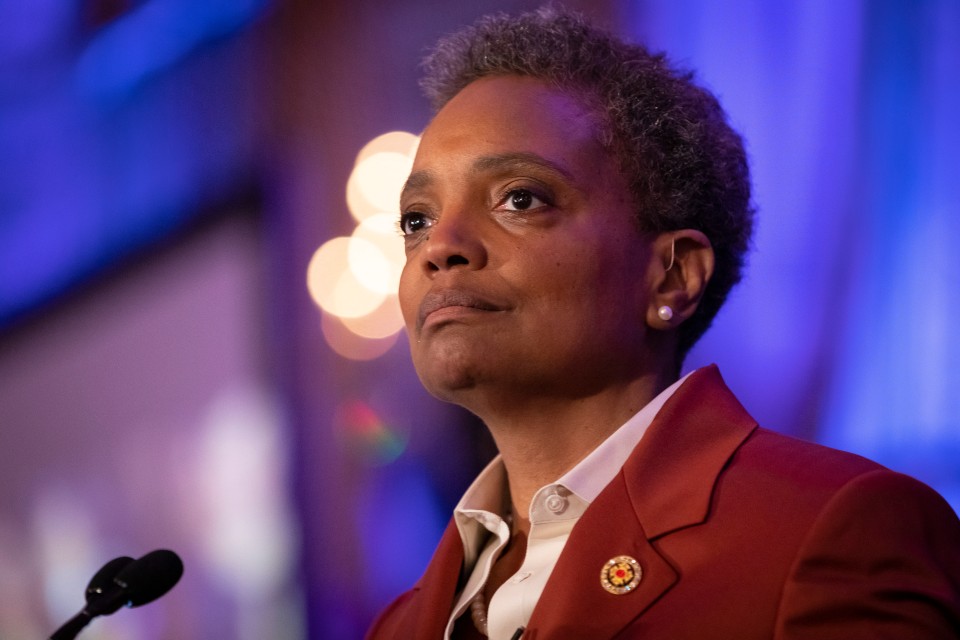 Lori Lightfoot celebrates her mayoral victory for on election night, at the Chicago Hilton in Downtown Chicago on April 2, 2019. The past 15 months have been a trying time for the first-term mayor. WBEZ

Between COVID-19, social unrest, violence and burgeoning budget deficits, the first-term Chicago mayor has been tested like no other.

Getting Chicago through 2020 has been no easy task.

A global pandemic. Civil unrest. A spike in violence. A billion dollar structural budget shortfall. These are the challenges Chicago Mayor Lori Lightfoot has faced since she took office 15 months ago.

“It is not an easy thing to face, and I don’t envy the mayor,” said Ald. Brian Hopkins, 2nd Ward, who sparred with the mayor on Monday after businesses in his downtown ward were looted. The scenes of smashed windows and stolen goods came after police shot a man in Englewood on Sunday, sparking a clash between cops and community residents.

Lightfoot called out Hopkins for running his mouth without all the facts, and said she doesn’t need “Monday morning quarterbacks and sideline critics.”

But after a tumultuous 48 hours during an already violent summer, Hopkins said Lightfoot needs to be a tougher leader.

“The only person who can potentially unite us and bring us together is the mayor, because that’s the way the city has always worked, going back to the Richard J. Daley days,” he said in a telephone interview Monday. “There’s a way to do it, but she hasn’t found it yet. And I hope she finds it soon, because otherwise we’re just going to continue spinning our wheels, or arguing over false solutions that don’t amount to anything.”

But Lightfoot ran and won her office on a promise to be different than the mayors who came before her, like former Mayor Richard J. Daley, long referred to as Boss Daley.

The mayor disagrees with complaints that she hasn’t done enough to reach out to other leaders in Chicago in times of crisis. As the city once again faced looting and a derecho that wrecked some streets and knocked out power to hundreds of thousands, the mayor said she has been in touch with at least 30 aldermen so far this week, and staff in her office have been in contact with all 50.

The city’s struggles this year are putting an even clearer focus on long standing divides in Chicago. The rich versus the poor. Downtown versus neighborhoods. Who the police actually protect and who they don’t.

Those issues, which divide the city’s residents, have given rise to further division among the city’s leaders.

Hopkins isn’t the only one the mayor has gone toe-to-toe with in her first 15 months on the 5th floor. There are very public social media spats with Republican President Donald Trump. And terse exchanges with frequent critics, like Ald. Ray Lopez, 15th Ward, and Ald. Anthony Beale, 9th Ward.

But Lightfoot has also sparred with other progressive Democrats, like Cook County State’s Attorney Kim Foxx, the Chicago Teachers Union, Cook County Board President Toni Preckwinkle and members of the City Council who align with the Democratic Socialists of America.

“I feel like most of us at the beginning were absolutely not trying to pick fights with her,” said Ald. Rossana Rodriguez Sanchez, 33rd Ward, who is DSA member. “We were just doing what we felt that we needed to do and what we were elected to do.”

Like the mayor, Rodriguez Sanchez is new to City Hall and ran against a legacy of the Chicago machine, promising big changes to how the city does business. Rodriguez Sanchez said the mayor can be combative at times, like when she voted no on Lightfoot’s 2020 spending plan.

“There was a promise that there was not going to be repercussions for voting against the budget and then she punished all of us with a website telling people to send us mail and be angry at us,” Rodriguez Sanchez recalled, adding that the budget process for 2021, which is just starting now, is going to be even more of a fight.

“I’m constantly pushing her on it because it’s important,” Villegas said. “I think that every alderman is owed the courtesy of speaking with the mayor on ideas and what some of their priorities are and figure out a way to come to an agreement.”

But the mayor is not the only rookie in City Hall right now. There are many elected officials navigating their first term, and missteps happen.

“I joke around that you get more instructions on how to operate a microwave than when you become a mayor or an alderman,” Villegas said.

Even the most experienced politicians are struggling to handle a year like 2020.

“The mayor and the aldermen are always the ones on the front line, but we also need all our partners — all hands on deck — to help,” Villegas said.