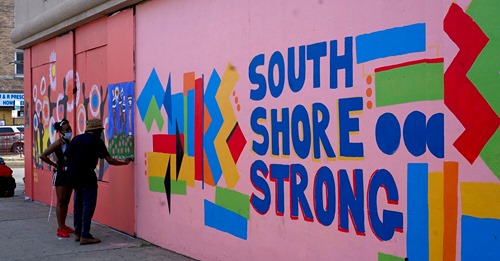 Tenants About Their Experiences as Renters. Here’s What We Learned.

In May, we surveyed South Shore renters about their tenant experience and information needs. Here are five things we learned from the process.

Last month, I highlighted some of the ways Chicago renters were struggling long before COVID-19 upended the housing market. That story was part of a larger interview project I’ve been working on since April that looked at the tenant experience in South Shore.

In May, I asked a team of City Bureau Documenters to interview South Shore residents about their tenant experience as well as their housing-related information needs. Documenters first attended a mandatory training on interviewing, and then were either paired with a South Shore renter we found through community outreach or connected with someone from their own networks. Documenters were allowed to interview multiple people and were paid for each interview they completed.

The goals of the interviews were simple:

Now that the interviews are completed, I wanted to share five interesting takeaways.

Renters have fewer legal protections and oftentimes less capital to shield themselves from housing instability than homeowners. I wanted to hear from people who are most vulnerable to the forces that destabilize communities and reshape Chicago.

Like many other Chicago communities on the South and West sides, tenants in South Shore face an excess of housing issues (evictions, rising rents, racial segregation, disinvestment). South Shore is unique in that it’s often referred to as the last Black community on the lake. The forthcoming Obama Presidential Center has many residents worried about displacement and gentrification in a neighborhood comprised mostly of renters and that already sees the most evictions in Chicago.

Who We Spoke With

1. THE LAKE IS EVERYTHING

The majority of residents we spoke with said the thing they love the most about South Shore is how close it is to lake. “Having grown up in South Shore, being close to the lakefront is definitely a plus,” one resident shared. “When I was younger, we’d walk from where my mom still lives to the cultural center or to the beach.”

Other things about South Shore that people said they enjoyed are the neighborhood’s architecture, community feel, easy access to public transportation and accessibility to downtown.

2. THE IMPACTS OF THE FOOD DESERT REMAIN

When the only supermarket in the neighborhood closed in 2013, residents found themselves without a nearby option to buy groceries. Last December, hundreds of community members celebrated when a new grocery store opened in the previous one’s place, marking the end of a nearly six-year-long food desert.

Of the 22 people we spoke with, 14 mentioned “grocery store” in their interviews. Some spoke positively of the new supermarket, saying things like “we finally got a grocery store.” Other residents wanted more than just one option to buy groceries, saying, “We only have one grocery store.” It seems like the food desert and the opening of the new supermarket have had a lasting impact on people’s relationship to the community, and, by extension, to Chicago.

3. REPAIRS ARE A BIG ISSUE

The majority of people we interviewed said they had issues with repairs and maintenance. Thirteen residents described their landlord as negligent at maintaining the unit or building. One resident said she had been dealing with the same maintenance issues for over a year. She described having to change her lifestyle habits out of fear of causing more harm to the unit and being held responsible for damages she didn’t create.

“Before I moved in, I did see certain things that needed to be repaired over time,” she said. “I made note of it and let the management company know… literally, a year later to the day they are just now being resolved. Then there was the issue with my bathroom door… the door was only hanging on by one hinge and it could not close properly for about three months. I could still use the restroom but when visitors would come over I would have to give them a disclaimer like, ‘Hey be careful. The door is kind of messed up.’ I also taught my daughter to just kind of live with it. The bathroom is still accessible. As long as we don’t get hurt and don’t cause more damage, we’re good. When a visitor came, the door fell on them… and that’s when [the owner] finally came out and fixed it.”

South Shore has been one of the hardest-hit communities by the COVID-19 pandemic. According to data collected by South Side Weekly, only one neighborhood, Little Village, has experienced more deaths than South Shore has. Only four residents we spoke with said their landlord contacted them to offer resources during the COVID-19 crisis. Others mentioned that when their landlord did contact them about the pandemic, it was about rent.

“I have more of a property management company, so I rarely get to talk to somebody in person and that’s my problem,” one resident explained. “I’m always treated like a number, not like a person. It wasn’t until the [COVID-19 cases] got high that we even had the conversation about the rent not going up. It’s always dollars and cents. It’s a constant money grab.”

When asked what changes they’d like to see in South Shore, most people said they wanted more economic investment and development in the form of more businesses, community beautification, and arts and education programs. While folks want to see more capital investment in the community, they also expressed concerns that widespread development would lead to the displacement of Black residents. The forthcoming Obama Presidential Center was a common example people gave when speaking about fears of displacement and gentrification.

“The Obama library brought real estate speculation to South Shore on a national level that was not in play previous to that moment,” one resident explained. “Even though I think local [developers] were very much looking at South Shore saying, ‘nice buildings, right along the lakefront—and there’s Black people. We need to move them out.’”

Another resident echoed a similar idea, “Other people are investing in our community and since it’s their investment, I feel like we’re going to be pushed out.”

Though telling, this project only offered a glimpse into housing issues in Chicago. If there are topics I didn’t touch on in this blog that you think deserve news coverage, please shoot me an email at Justin@CityBureau.org

To get twice-monthly emails including Chicago news and events, sign up for City Bureau’s Chicago newsletter.