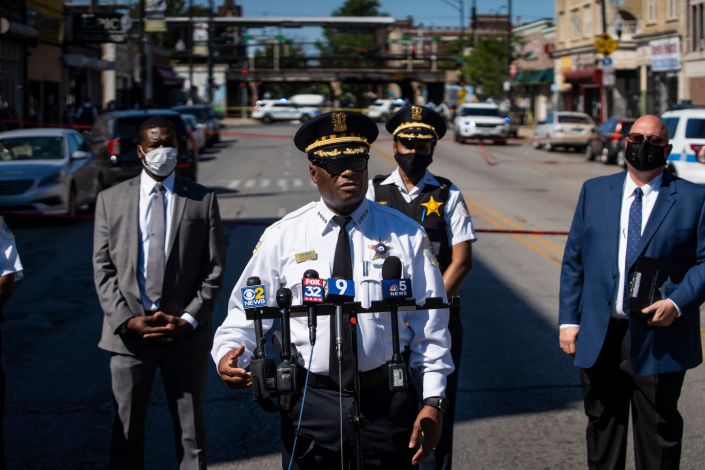 CHICAGO – The nation’s second-largest county has recorded more homicides this year than in all of 2019, the majority of which – 95% – were people of color, the Cook County Medical Examiner’s Office announced this week.

Chicago accounts for most of the deaths, with much of the violence occurring in a handful of neighborhoods on the city’s south and west sides.

The Windy City – like others across the country – has seen an uptick in violent crimes this summer amid the coronavirus pandemic, mass layoffs and nationwide unrest. Murders and shootings are up 52% from the same time last year, according to police data, and dozens of children under 10 years old have been shot, some fatally.

Children pay the price: Shootings are on the rise in several cities

In July, the city saw its largest mass shooting in recent memory, when 15 people were shot at a funeral on the city’s South Side.

“Facing illnesses, facing deaths, facing also the higher rates of unemployment and loss of income in our communities has also, unfortunately, played a role in the levels of violence we’ve seen throughout the year,” Katya Nuques, executive director of a community organization in the predominantly Latino Little Village neighborhood, said during a press conference Wednesday.

“The pandemic really has highlighted the vulnerabilities our communities already faced.”

Thousands of Chicagoans have lost their jobs amid the pandemic, which has disproportionately affected people of color in the city. There have been more than 75,000 cases of COVID-19 in Chicago, and nearly 3,000 people have died, with three in four deaths among people who are Black or Latinx, according to city data Tuesday.

Demeatreas Whatley, a violence interrupter with the organization Cure Violence in the South Side neighborhood of Grand Crossing, which has historically seen high rates of shootings, said that his community feels “on edge” this year.

He said that because bars and lounges are closing earlier than usual due to COVID regulations, people are congregating on blocks late at night, making them easier targets for retaliatory shootings, where bystanders have been caught in the crossfire.

“People are not trying to go in the house; they congregate on these blocks,” Whatley said. “The way it is now, these guys, if they get word that three of their guys are getting tooled with on a particular block, they don’t care – they’ll shoot the whole block up.”

While murders in Chicago fell by half from July to August, violent crime appeared to be on the rise again in September. Fifty-three people were shot, 10 fatally, in 35 shootings over the weekend, Police Superintendent David Brown said Monday. Labor Day weekend saw similar numbers.

Brown expressed frustration that some people arrested over the weekend had committed several felonies in the past.

“Violent offenders need to spend more time in jail in this city,” he said. “They need to be held more accountable.”

“There’s not a comparable year. That’s five times any previous year anyone can recall,” he said. “We’re risking everything.”

“I am pleased to report that Operation Legend is working,” Barr said. “Crime is down, and order is being restored to this great American city.”

Since its launch two months ago in Kansas City – where 4-year-old LeGend Taliferro was killed – the federal operation, now active in nine cities, has dispatched more than 1,000 agents to help state and local enforcement fight violent crime, Barr said. As of last Wednesday, federal agents had made more than 2,500 arrests, many for violent crimes, and federal charges had been filed against 600 defendants, Barr said.

‘Tired of burying our children’: 4 toddlers shot in Chicago amid surge in gun violence

The operation dispatched 400 federal agents to Chicago – including 200 new agents and 200 that were “repurposed” –  and gave more than $9 million in grants to police, who hired 75 more positions, Barr said.

More than 500 people had been arrested in Chicago, many for violent crimes, and federal prosecutors had charged 124 defendants, including 90 with firearms charges and 30 drug trafficking charges, Barr said.

“The results of those actions speak for themselves,” Barr said. “Operation Legend has played a critical role in cutting Chicago’s murder rate roughly in rough.”

But Mayor Lori Lightfoot said last week that it was too early to be taking a “victory lap.” She said it was “just factually inaccurate” to attribute the reduction in murders to the federal assistance. While the city began to see a downward trend in shootings and homicides beginning in late July, the first additional federal agents that came to Chicago as part of Operation Legend didn’t arrive until Aug. 3, she said.

“We are absolutely leaning into those federal relationships, but the cause and effect that Attorney General Barr tried to make today, I think the facts just don’t bear that out. Not yet,” Lightfoot said last week.

Lightfoot did not meet with Barr during his visit to the city but wrote him a letter calling on the federal government to focus on implementing background checks and regulating interstate gun trafficking to prevent gun violence in Chicago. Lightfoot has written similar letters to Barr and President Donald Trump in the past.

At the local level, Lightfoot is unrolling a $750 million initiative to invest in south and west side neighborhoods and has launched a series of police reforms with a focus on strengthening a community policing initiative that began last year. On Monday, Brown announced that 47 officers were beginning four weeks of training in community engagement and “district-specific culture and history immersion” to expand the city’s neighborhood policing initiative into three new districts.

“If Chicago’s going to be a safer city, reducing violent crimes to historical lows, it will be because of community policing,” Brown said. “The best way to reduce crime is to prevent it from happening in the first place, and you do that through community policing – getting officers out of their cars and into the barbershops and salons and churches and into the living room of our neighborhood where they are assigned.”

The strategy is not new to Chicago – where officers once came from other cities to learn about the approach –  and while cities like New York have seen some success with the program, critics say it’s not where Chicago should be focusing its efforts.

“All that stuff is good, but the community has a distrust with the police. The social unrest starting with the George Floyd thing, that really tipped the pot over, so to speak. People are angry,” Whatley said. “A lot of the elders have no faith in police because some of their kids have been murdered and there’s been no arrests. That’s why it’s important that we try to prevent those things from happening in the first place.”

Several anti-violence organizations held a press conference Wednesday to call on the city to increase its budget for violence prevention efforts from $11 million to $50 million to fund community-based programs that train outreach workers, intervene in gang disputes, provide support services and more.

“Our outreach programs are reaching the young people most at risk and guiding them away from crime. We just need to do more of it and sustain the effort long term,” said Vaughn Bryant, executive director of Communities Partnering 4 Peace, a coalition of more than a dozen community groups.

Bryant attributed this year’s surge in violence to “COVID, the economy, the George Floyd protests and ongoing systemic oppression.” He said his organization can’t fix the city’s epidemic of gun violence without city investments in housing, economic development and health and transportation services in historically underserved communities.

“There’s some systems-level work that has to be done in conjunction with the work we’re doing,” Bryant said, echoing the hundreds of peaceful protesters who have taken to the streets day-in and day-out this summer to voice the same argument. “All of those things go together.”