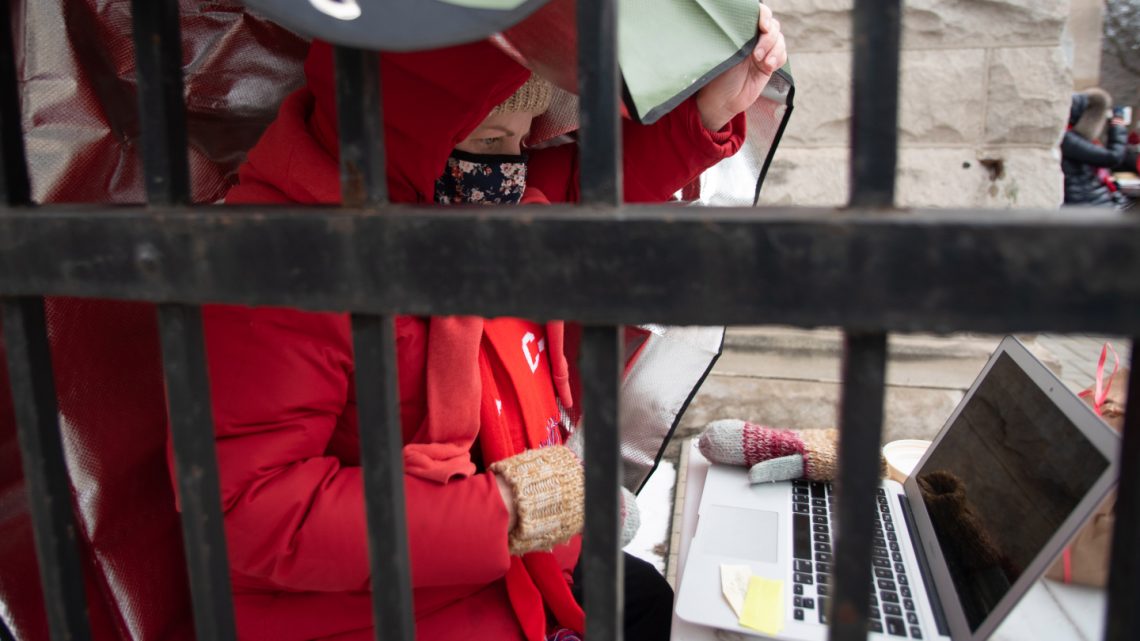 About one-third of the pre-kindergarten and various cluster group students eligible to return to CPS schools for in-person learning on Monday will do so, district leaders say. Kindergarten through eight grade students are set to follow suit February 1.

That’s about 6,000 students expected to return Monday and another 70,000 starting next month.

Lightfoot and Jackson have battled with the teachers union for weeks over how, if and when to relaunch in-person classes, following a fall term of all remote learning.

City leaders have insisted schools are safe for in-person learning despite the pandemic, and that it is critical for that option to be available to students and families who want it. Union leaders have countered the city’s coronavirus positivity rate is too high for a return to school, and teachers concerned about their health have little recourse to opt out.

That tension intensified Friday after Lightfoot and Jackson said in a separate press conference that teachers required to return to classrooms could face discipline and be docked pay if they refuse to show up. They also criticized union leaders for allegedly encouraging teachers to stay home.

Later Friday, CTU leaders said in a virtual press conference it would be “illegal” for the district to withhold pay. Thad Goodchild, an attorney with the union, said the conditions teachers found when they returned to buildings this week were “deplorable.”

“Educators who exercise their rights to decline unsafe work assignments and continue to work remotely are entitled under our contract and state law to be paid for that work,” he said. “It is illegal for CPS to withhold their pay as they’re threatening.”

“I have been a teacher for 13 years, I wanted to be a teacher since I was five years old,” she said. “All I want to do is teach and I shouldn’t have to choose between a life and death health decision to teach my students.”

RELATED: CPS Will Have ‘Sick Rooms’ Where Ill Children Can Wait For Parents To Pick Them Up, District Says

Lightfoot said earlier Friday she understands teachers’ health concerns and commended their commitment to children, but the district must provide an option for in-person learning, particularly for those students struggling remotely and falling behind.

“What this all boils down to is giving families the option to make the best decisions for themselves,” Lightfoot said. “To deny parents this option is irresponsible and wrong.”

Half of city teachers called back to the classroom Monday chose to stay home. Jackson said the number of teachers reporting to school increased throughout the week and schools should be adequately staffed.

“I feel confident that our teachers will be here,” said Jackson, but she warned educators who fail to return to in-person teaching as required will be considered absent without leave, and not be paid.

Goodchild and teachers on the call said despite those not returning to school buildings will continue trying to teach remotely if the school district doesn’t block their access.

The union has not ruled out voting to strike if negotiations with the district break down, but did not provide details Friday if or when a vote would be held.

Goodchild also said the union has offered the school district two paths forward for reopening school buildings; waiting until the city’s Covid-19 test positivity rate falls below 3 percent or 400 new cases per day, or limiting the reopening to only those educators and staff who volunteer to return to school buildings with weekly testing for in-person staff.

On Friday, Jackson said the union “moved the goalposts” during discussions this week by introducing new demands, including on issues like affordable housing which Lightfoot said was outside the scope of the teachers’ contract.

Stacy Davis Gates, CTU vice-president, said she “took offense to being told that we cannot advocate for better housing for housing insecure students and their families.”

Davis Gates said education would be permanently changed by the pandemic, and the district must be open to creative ways to respond.

“Because we are close to a vaccine, we would be willing to figure out what it meant to innovate, reconstruct school calendars,” she said. “I am growing weary of this expectation that our union has to go on strike in order to get a safe reopening plan.”

CTU President Jesse Sharkey said the district’s mandate parents must choose at the beginning of the semester to opt in to in-person learning was solely to obtain a “PR number” to pit parents against teachers.

“You shouldn’t have made parents make that choice, you should have said, ‘We’re going to let you opt back in when we can demonstrate that it’s working,” he said.

Teachers Union Blasts Mayor, CPS Chief For Threatening To Discipline, Dock Pay Of Those Who Don’t Report To School