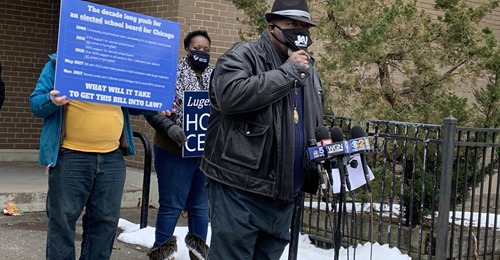 More than a dozen community organizers are calling on Illinois Senate President Don Harmon to allow that chamber to vote on a bill that would allow Chicago residents to elect their school board, which is what happens in the more than 800 other school districts across the state.
“This is not a fight between [teachers] unions and the mayor,” said Moises Moreno, director of Pilsen Alliance, one of the community groups who want the legislation voted on during this week’s lame-duck session. “This is a fight of community, of parents, youths. We want our voices heard.”
https://chicago.suntimes.com/education/2021/1/10/22223736/cps-families-of-color-elected-school-board-legislature-vote?fbclid=IwAR3al19d-zxl1L1D7jsREg5MDwITItgzRcfa2I39CHwgLByi7xIyQmm6CD4