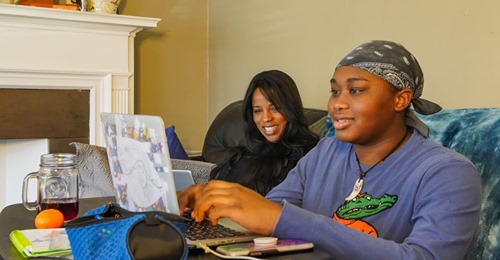 If the remote school goes according to plan, more than 300,000 Chicago children will be sitting behind computer screens this week.

Months of debate, anxiety, preparation and anticipation are culminating with the kickoff Tuesday of the most unusual school year in decades, with yellow buses and packed backpacks replaced with computer screens and a hope for a better experience than the spring.

If remote school goes according to plan, more than 300,000 Chicago students will be sitting behind computer screens this week, many of them meeting their teachers virtually for the first time.

Questions remain, however, about how many children lack access to quality internet, how working-class families will handle having their kids at home again, and whether hours of screen time each day, essentially a full school day online, will be beneficial for students.

Mayor Lori Lightfoot’s office and Chicago Public Schools officials have said access to computers is not expected to be the problem it was earlier this year, after 128,000 devices were distributed in the spring with another 17,000 handed out ahead of this school year.

Officials also announced the “Chicago Connected” program in June, pledging to put free, high-speed internet into the homes of 100,000 CPS students who lacked reliable broadband access. A little over two months later, the families of 24,000 kids have signed up for the program, while the rest could still be without quality internet to start the school year.

Virginia Hiltz, principal of Saucedo Elementary in Little Village, said she’s not worried about computer access but has some concerns about internet connectivity. She said the free internet program has helped, though, as she and her staff have partnered with community groups over the past few weeks to contact every Saucedo family, many of whom have registered. She’s encouraged by the progress.

Aside from technology, Hiltz said she feels Saucedo has done a good job planning for a better remote learning experience, from learning more about technology to establishing more efficient communication methods.

Some Saucedo educators conducted socially distant driveway visits to briefly meet their students before the start of the school year.

“We had to support each other,” Hiltz said. “People who have been teachers for a long time had to say, ‘I don’t know how to do this.’ And maybe a second-year teacher stepped in and said, ‘I can help you.’ Being able to show that vulnerability, it just brought teams closer together, faster.

“I would describe my attitude right now as optimistic and confident but also prepared to face challenges,” Hiltz said. “But isn’t that how the first week of school is anytime?”

Schools chief Janice Jackson at a news conference Friday tried to reassure parents and students that learning at home — which will be in place at least through Nov. 6, the end of the first academic quarter — will start to feel “as normal as any other school experience.” Most students will be online for several hours each day, with older kids spending more time behind screens.

“Assignments will be graded, attendance will be taken and students should expect to be held to the same high standards that they receive during in-person instruction,” Jackson said.

But some families, teachers and even Board of Education members have said they would have preferred an experience tailored more to the drastically altered conditions during the pandemic.

School board member Luisiana Melendez, who specializes in early childhood education, said at last month’s board meeting that research shows younger students don’t benefit from extended screen time and need adults sitting with them to guide their virtual learning experience, which isn’t a possibility for many working-class families.

“That is one of my major concerns with remote learning and young children,” Melendez said. “It demands a lot from the families that are already stressed.”

Cassandra Kaczocha, a mother of three students at Boone Elementary in West Ridge, said she wishes there was less continuous computer time built into the day, because at least one of her children struggles with screens as it is.

“It’s too much. It’s way too much,” Kaczocha said. “In the spring we did a lot of project-based learning that was really beneficial for my kids and not much online in front of the screen. That helped me as a parent not having to be running all over the house checking in to make sure kids are getting logged in when they’re supposed to be and that they’ve got the bandwidth that they need.”

The Chicago Teachers Union has been negotiating with CPS the past few months over schooling expectations this fall, including screen time required for teachers and that some school staffers, such as clerks and tech coordinators, are being told to work in schools.